Grace defied the odds by living past infancy with a condition that is often fatal. Her parents, Heidi and Nate, didn’t think she would survive much longer until they learned about a lifesaving treatment available at Children’s Hospital of Philadelphia (CHOP). 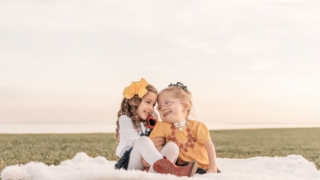 Heidi was 19 weeks pregnant when she was told something was wrong with Grace, the child she and her husband, Nate, were expecting. During a routine ultrasound, the technician noticed that the bones in Grace’s long limbs were shorter than they should be.

Heidi’s obstetrician referred her to a specialist in St. Petersburg, Florida, which wasn’t too far from her home. The specialist confirmed that Grace had some type of skeletal disorder, but wasn’t able to diagnose the specific form of dysplasia prenatally. To date, more than 350 skeletal disorders have been identified. Conclusive prenatal diagnosis is challenging, especially when there is no family history of the disorder, as each disorder is rare and ultrasound is limited.

When Grace was delivered by scheduled C-section, she was stillborn for 11 minutes and had to be resuscitated. She spent the next two months in the NICU. During that time, the care team confirmed she had campomelic dysplasia, a severe type of skeletal dysplasia that affects development of the skeleton, reproductive system, and other parts of the body. They also diagnosed her with laryngotracheomalacia, a condition in which the tissues of the larynx fall over the airway opening and partially block it, as well as a soft cleft palate. These conditions made it difficult for her to breathe, eat and gain weight.

She was intubated and received a nasogastric tube (NG tube), which carried food and medicine through a tube that ran through her nose and into her stomach. Eventually, she was switched to a gastrostomy tube (G-tube), a tube surgically inserted into her abdomen to deliver nutrition directly to her stomach. Grace also needed prolonged airway support so she had a tracheostomy, a surgical procedure that created an opening through her neck into her windpipe to deliver oxygen to her lungs.

Upon discharge from the hospital, Grace was referred to an orthopaedist, a cardiologist, a pulmonologist, a physical therapist, an occupational therapist and a host of other specialists for follow-up care.

The search for a solution leads to CHOP

Few people with campomelic dysplasia survive past infancy. As individuals with the condition grow, they can develop an abnormal curve of the spine and other spine abnormalities that can cause thoracic insufficiency syndrome (TIS), a complex condition that affects breathing and lung growth.

In her first year of life, Grace was in and out of the hospital with respiratory issues. Around Thanksgiving, she caught pneumonia and the flu and needed to go on a ventilator. From then on, she was on the ventilator around the clock, with only 10- to 15-minute breaks here and there. It helped Grace breathe, but was far from a long-term solution. Heidi had little hope.

“I thought her little chest would eventually not have enough space and she would get sick and die,” says Heidi.

When Grace was 2, her pulmonologist went to a conference at Children’s Hospital of Philadelphia (CHOP) and met team members from CHOP’s Wyss/Campbell Center for Thoracic Insufficiency Syndrome (CTIS). The center is one of the few places in the world able to offer the vertical expandable prosthetic titanium rib (VEPTR), a treatment for children with TIS that expands the chest cavity and allows the ribs, spine and lungs to grow.

The pulmonologist called Heidi and Nate and told them he may have found a solution for Grace.

“It was the first little spark of hope that there was something out there for Grace that wasn’t just doom and gloom,” says Heidi.

The family traveled to Philadelphia and met with the CTIS team. After a comprehensive evaluation, they agreed that VEPTR surgery was the best treatment option. Fortunately, Heidi’s parents live just 15 minutes outside of Philadelphia in New Jersey, so they had a support system close by.

Grace had two VEPTR devices implanted to straighten her spine and separate her ribs so her lungs could grow and expand. Within a few months, Grace’s digestion and breathing had already improved.

The VEPTR device needs to be adjusted periodically so a child can continue to grow taller and expand their chest. After Grace’s first VEPTR adjustment, she was able to stay off the ventilator longer. She was also finally able to get enough air into her tracheostomy to make her first sounds.

“It was a huge accomplishment for her,” says Heidi.

Grace has returned to CHOP every six to nine months for VEPTR adjustments. After each one, her parents have seen greater improvements in her health.

Now 6, Grace only uses the ventilator at nighttime. And she talks up a storm.

“She has improved tremendously,” says Heidi.

Grace is now in first grade and is doing great. Heidi and Nate are hopeful that eventually Grace will be able to breathe and talk on her own without a trach or ventilator.

“Before, I didn’t think beyond her toddler years,” says Heidi. “This has definitely given us hope for her future.”