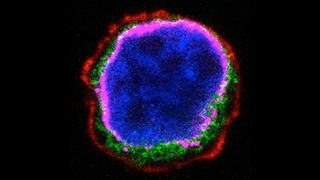 Oncology researchers at Children’s Hospital of Philadelphia (CHOP) have revealed the biological events by which some cancer cells develop resistance to a groundbreaking cellular therapy that has successfully treated many patients with particular forms of leukemia. They also found clues to a possible method to overcome the cancer’s resistance.

Andrei Thomas-Tikhonenko, PhD, and colleagues reported how leukemia cells may escape being destroyed by chimeric antigen receptor (CAR) T-cell therapy, in an online article in Molecular and Cellular Biology, highlighted on the cover of the Nov. 1, 2018, issue.

CAR T-cell therapy has become a landmark achievement in personalized cancer immunotherapy — harnessing the body’s immune cells to treat cancer. CHOP and Penn Medicine researchers have shown that CAR T- cells, taken from each patient and bioengineered to hunt down and kill acute lymphoblastic leukemia (ALL) cells, have dramatically improved survival in children and young adults who relapsed or never responded to their initial chemotherapy. Last year, when the U.S. Food and Drug Administration approved the CAR T-cell drug Kymriah®, it was the first-ever gene therapy drug to be approved in this country. However, some 20 to 30 percent of ALL patients receiving CAR T-cell treatment either never respond or develop resistance within a few weeks.

Thomas-Tikhonenko and colleagues previously showed that mutations in the leukemia cell hamper a protein that is essential for CAR T-cell therapy to succeed. That protein, the CD19 antigen, needs to be produced in sufficient quantities to be recognized by CAR T cells. Some of the originally discovered mutations prevent CD19 from ever being produced. Yet other seemingly innocuous mutations would simply insert a few extra elements into the protein’s amino acid chain. How such insertional mutations could cause resistance to therapy was not clear. In the current study, the collaborative research team, centered around Asen Bagashev, PhD, and Elena Sotillo, PhD, focused on the biological mechanisms at work.

In order for CD19 to be recognized by CAR T cells, it first needs to reach the surface of the leukemia cell. The researchers found that the insertional mutations cause the CD 19 antigen to misfold within the cell so that it can’t be carried intact to the cell surface, and is instead retained in the structure called the endoplasmic reticulum. However, they also found that misfolded CD19 proteins are tightly bound to the machinery that breaks down full-length proteins into short peptides and transports them to the cell surface for immune recognition.

While such peptides are invisible to CAR T cells, they are often recognized by native T cells, which latch on and kill target cells through their T-cell receptors (TCRs). Such TCR-armed immune cells are emerging as a potent weapon against certain types of solid tumors, such as ovarian cancer.

“Thus, our next steps are to investigate whether mutant CD19 peptides indeed reach the leukemia cell’s surface, and then to generate T cells that recognize and attack that peptide,” said Thomas-Tikhonenko. “This could present an opportunity to improve an already innovative cancer treatment.”

Photo: This photograph of an acute lymphoblastic leukemia cell, stained to highlight different compartments, shows that the mutant protein (green) does not appear on the outside of the cell membrane, shown in red. Instead, it resides just outside the cell nucleus (blue) in close association with the endoplasmic reticulum (magenta).