Peanut allergies can be life-threatening, but CHOP researchers are hoping to save lives with an innovative skin patch. 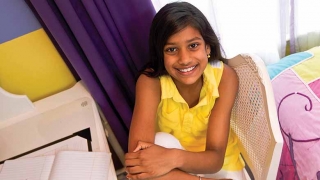 Kids with nut allergies get used to carrying around EpiPens everywhere they go, toting BYO cupcakes to birthday parties, and obsessively reading ingredient labels on food — but they wish they didn’t have to.

It takes a lot of time and planning to stay healthy in a nutty world. And even with careful avoidance, food allergies — including those to other foods like milk, soy, eggs and wheat — are responsible for almost 100,000 emergency room visits and 150 to 200 deaths per year in the U.S. alone.

Peanuts, out of all food allergies, most often cause the reactions that lead to fatal food anaphylaxis. While many kids outgrow allergies in general, only about 20 percent of children with peanut allergies ever do.

That’s why 11-year-old Megha Parikh, of Basking Ridge, NJ, and her family were eager to participate in a peanut desensitization trial currently underway at CHOP and 23 other centers worldwide that is experimenting with the novel idea of a skin patch to induce peanut protein tolerance.

This busy sixth-grader, whose life is filled with homework, art projects, playing the flute, taekwondo, parties and family trips, must always remain vigilant against the threat of her peanut allergies. Megha would rather be putting that energy and focus into something more fun.

Megha’s mom, Rashmi, feels that any improved peanut tolerance, no matter how small, will be worth it. “It would be such a relief to know that she won’t have a reaction right away,” says Rashmi, who has seen her daughter suffer accidental exposures that trigger hives, vomiting and lethargy.

“Our family has embraced Megha’s allergies and it’s become a part of our lives, but it would be a huge relief to know that Megha’s reaction to peanuts will be less severe. Our main concern is her safety.”

The patch delivers peanut proteins on the upper layers of the child’s skin. The goal is to eventually change the child’s immune system and essentially eliminate the allergy — or at least lessen the reaction enough to provide some protection against accidental exposures, buying time to seek treatment. The hope is that the patch can deliver the peanut protein with fewer side effects than occur with traditional oral desensitization, in which kids eat the peanut protein.

CHOP is a national leader in food desensitization studies and has active studies involving milk, egg and peanut allergies, many of which have shown great success in reducing or eliminating the allergies. Much of this pioneering work would not be possible without the generous support of numerous families, including Gwen and David Keiser, Sharon and Harry Pollack, and Cynthia and Robert Savett.

Jonathan Spergel, MD, PhD, section chief of CHOP’s Allergy Program and co-director of the Center for Pediatric Eosinophilic Disorders, explains why parents are eager to participate: “Some parents want to find a cure, and by volunteering their child, they can move the process one step closer to getting a cure.”

If it works, he says, children in the study will reap the benefits as much as five years before the treatment is FDA-approved.

The goal of the patch is that even if Megha and her fellow participants never eat a peanut butter and jelly sandwich or plow through a pack of Reese’s Peanut Butter Cups, at least if they are accidently exposed to a peanut, they will be OK, or have enough time to get to a hospital.

“This patch gives us hope, where there were no treatment options before,” says Megha’s CHOP doctor and principal investigator on the study, Terri Brown-Whitehorn, MD.

Megha’s reaction to joining the study? “Even if it doesn’t help me, but another kid after me, it will be worth it.”