On Aug. 30, 2017, the U.S. Food and Drug Administration approved the use of chimeric antigen receptor T cell (CAR-T) therapy for the treatment of relapsed or refractory pediatric and young adult patients with B-cell acute lymphoblastic leukemia (ALL). As the first-ever cell therapy to win FDA approval, Kymriah® (tisagenlecleucel, Novartis) is a CD19-targeted CAR-T therapy, and its approval was the result of five years of clinical trials supervised by lead investigator Stephan Grupp, MD, PhD, Director of the Cancer Immunotherapy Program at Children’s Hospital of Philadelphia (CHOP).

The FDA approval of Kymriah has shifted the paradigm for pediatric cancer treatment — and at CHOP, more cell therapies are on the horizon.

Shannon Maude, MD, PhD, is conducting a pilot study to evaluate an alternative, humanized CD19 CAR-T product, referred to as huCART19 or CTL119. This CAR is being studied for retreatment in patients with CD19+ leukemia or lymphoma that was previously treated with cell therapy, as well as first CAR therapy for relapsed ALL.

CHOP’s team — spearheaded by Stephen Hunger, MD, Shannon Maude, MD, PhD, and Stephan Grupp, MD, PhD — has played a key role in the development of a clinical trial testing Kymriah as part of first-line therapy, which is planned to open in the next few months. This study will be run in multiple centers through the Children’s Oncology Group and chaired by Dr. Maude. Patients with very high-risk ALL based on persistent detectable minimal residual disease after 3 months of therapy will be eligible for this trial. The trial will test whether cell therapy can prevent relapse and/or the subsequent need for bone marrow transplant in these children with treatment-resistant ALL.

In addition, CHOP is designing trials to define other ALL populations that may benefit from CD19 CAR therapy, such as those with CNS relapses and patients with Down syndrome and relapsed ALL, among others.

One challenge with tisagenlecleucel therapy is that relapses can occur due to loss of CD19 expression on the leukemia cell surface. An important research goal is to identify additional proteins on ALL cells that can be targeted along with the CD19. One such target, CD22, is currently being tested and will be deployed in combination with a CD19 CAR next year.

Researchers are also working on developing new therapies that reprogram a patient’s own immune system cells to kill other types of cancer besides blood cancers. So far, solid tumors have generally resisted CAR-T cells. For patients with unresectable, metastatic or recurrent synovial sarcoma — a rare form of soft tissue cancer — CHOP is participating in trials testing a different kind of engineered T cell, referred to as a TCR engineered T cells. CAR-T cells are being developed for another pediatric cancer, neuroblastoma. In addition, the possibility is being explored that solid tumors will respond to CAR-T therapies when they are combined with another agent intended to boost T cell function.

With all these promising avenues of investigation, CHOP is on the verge of the next breakthrough in immunotherapy to treat the toughest pediatric cancers. 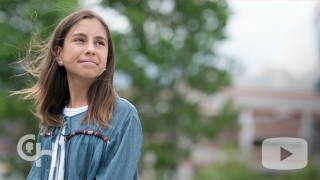 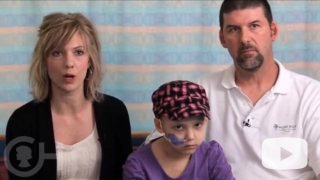 Emily Whitehead was the first child to be enrolled in a clinical trial for patients with B cell cancers such as acute lymphoblastic leukemia.