A 24-month-old African-American boy presented to his pediatrician for a well-child check. He had no complaints and an unremarkable physical exam. Complete blood count sent as routine 2-year-old screening showed pancytopenia with hemoglobin 6.1 g/dL, a WBC count 3.6 K/uL, and platelet count of 120 K/uL. Differential was not initially available. Family history was unremarkable. Pennsylvania newborn screen had been normal for hemoglobin screening. The patient was referred to the Emergency Department, where he was afebrile with normal vital signs. On targeted questioning, parents noted decreased activity and appetite with increased fatigue. Recent viral symptoms were denied. Exam was notable for pallor and a 2/6 systolic ejection murmur, with no jaundice or hepatosplenomegaly. Repeat blood counts in the ED were essentially the same. White blood cell differential analysis showed 14% neutrophils, 84% lymphocytes, 2% atypical lymphocytes, and calculated absolute neutrophil count of 520 per uL. He received a transfusion of packed red blood cells and was discharged home with Hematology follow-up. Over the next 2 months, he required 2 pRBC transfusions for hemoglobin <8 g/dL. Bone marrow aspirate was performed that showed 15% sideroblasts and 4% blasts.

Sideroblasts are red blood cell precursor cells that have abnormal mitochondrial iron accumulation. While numerous causes of sideroblastic anemia exist, mitochondrial respiratory chain disease is among the most common. Mutations in more than 350 genes have been found to cause mitochondrial disease, which are energy deficiency disorders having highly variable signs and symptoms. There is no universal phenotype, biomarker, age of onset, or mode of inheritance. While patients may present with an apparently isolated symptom, a common hallmark of mitochondrial respiratory chain disease is progressive multisystem involvement over time that may only become apparent with focused evaluations. In this case, further testing revealed lactic acidemia and exocrine pancreatic insufficiency.

The co-occurrence of sideroblastic anemia and exocrine pancreatic insufficiency in a young child is a classical presentation for single large-scale mitochondrial DNA deletion syndrome (SLSMDS), classically labeled as Pearson syndrome. However, SLSMDS patients commonly present with diverse phenotypes and changing organ involvement that may evolve over a patient’s lifespan. (See figure 1) 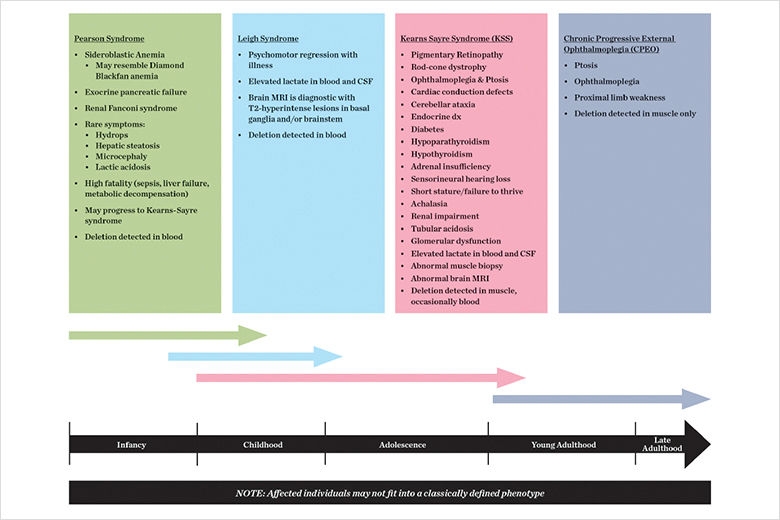 Patients do not always fit into the existing classical syndromic phenotypes for single large-scale mitochondrial DNA (mtDNA) deletions, but instead show a variety of features from among the subtypes of SLSMDS. All patients who are discovered to have SLSMDS should therefore be similarly screened and managed (see table 1 below).

SLSMDS is caused by a large mtDNA genome deletion (ranging from 1 to 10 kilobases, with a 5 kilobase deletion being common). mtDNA is comprised of 37 genes, all of which are essential for mitochondrial respiratory chain function to generate energy. Unlike nuclear genes, mtDNA is nearly always maternally inherited. A single large deletion occurring anywhere within the circular mtDNA genome causes SLSMDS, and when present, typically has arisen in a sporadic fashion rather than through maternal inheritance.

Multiple mtDNA deletions, instead of single deletions, typically indicate a patient has a mtDNA maintenance disorder caused by one of multiple different nuclear gene disorders. The optimal genetic diagnostic approach to identify mtDNA deletions is by whole mitochondrial DNA genome sequencing using next generation sequencing, often starting in blood. In patients without hematologic involvement, however, the mtDNA deletion may only be found in DNA isolated from muscle.

Genetic counseling and clinical management for children identified to have mitochondrial disease, including SLSMDS, is available in CHOP’s Mitochondrial Medicine Frontier Program.

Find the latest articles from Children's Doctor, our newsletter for physicians, medical staff and alumni. The electronic archives include expanded content as well as articles from previous issues.