Published on Apr 30, 2019 in Breakthrough Report 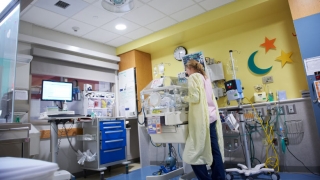 Diagnosing sepsis is a race against time. More children die each year from sepsis, the body’s extreme and life-threatening response to infection, than die from cancer. Yet, swiftly and accurately determining if a child has sepsis or a less severe infection is difficult.

Early detection leads to quicker treatment and better outcomes, which for children can have lifelong consequences. But treatment is aggressive — heavy-duty antibiotics, IV fluids, blood pressure medications, sometimes a breathing tube — and shouldn’t be pursued unless doctors are certain or almost certain the child has sepsis.

It’s just that conflict doctors and researchers at Children’s Hospital of Philadelphia (CHOP) are working to resolve. And, with the help of innovative data analysis, are making great strides. In the CHOP Emergency Department (ED), the early detection “catch rate” of children with sepsis went from 72% in 2012 to 96% today. And a novel computer-based approach in the Harriet and Ronald Lassin Newborn/Infant Intensive Care Unit has promise to more accurately diagnose the most vulnerable infants.

“CHOP has made diagnosing and treating sepsis an institutional priority,” says emergency physician Fran Balamuth, MD, PhD. “Working together, we’ve made real progress, but there’s more for us to do.”

What’s so dangerous about sepsis?

Sepsis starts with an infection anywhere in the body that gets into the bloodstream. That causes the immune system to overreact, triggering inflammation and starting a perilous cascade of symptoms that can send the patient into septic shock, when organs begin failing or shutting down. In the most serious cases, inflammation can restrict blood flow to a limb and result in amputation.

“Most children who come to the ED with a fever or tachycardia are not septic,” says Balamuth. “We found that using only clinician’s judgment to identify patients with sepsis was not good enough. When we investigated some sort of electronic alert — using an algorithm that pulled vital signs from the patient’s electronic medical record (EMR) — we were concerned we’d pick up too many false positives. In a crazy busy ED like CHOP’s, that could possibly result in alarm fatigue, or missing alerts.”

A hybrid solution to identifying sepsis: electronics plus humans

Balamuth and her research team pored over more than 85,000 ED patient medical records to identify which symptoms were most common is patients eventually diagnosed as septic. By combining the high-tech help of EMR with the clinical expertise of ED nurses and doctors, they were able to create a more effective four-step diagnostic process for sepsis.

If any answer is yes, the EMR sends an alert for a “sepsis huddle.”

Progress but not perfection

“It’s not always black or white,” Balamuth says. “So, we’ve started the ‘sepsis watcher protocol’ to allow the clinical team more time to make a treatment decision. This means that for an hour, the child has more frequent vital sign checks and assessments. Then there’s a second sepsis huddle to reevaluate.”

About 10 to 15% of Emergency Department patients have vital signs that trigger the first step alert, but a sepsis huddle is called on only about 1% of the more than 90,000 annual ED patients. Of those, approximately 300 to 400 children are deemed to have sepsis and admitted to CHOP for treatment.

“It’s not perfect, but it’s a big improvement,” says Balamuth. “It’s tricky because we don’t want to overtreat. The Sepsis Pathway treatment protocol in the ED is not something you do willy-nilly. But missing a case is a big problem, a potential death or a prolonged recovery.” 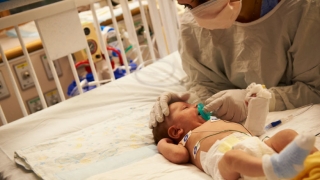 As tricky as it is to accurately diagnose children with sepsis in the ED, it’s even more difficult for infants in the Newborn/Infant Intensive Care Unit (N/IICU), who are already extremely fragile. Sepsis rates in hospitalized premature or chronically ill infants are 200 times higher than in full-term healthy babies.

“Infants are not little children,” says neonatologist Mary Catherine Harris, MD. “They are uniquely susceptible because their immune systems are immature. And the symptoms are variable, depending on the patient, and are often very subtle and ambiguous. Clinical recognition of sepsis is delayed in 30 percent of the cases.”

To improve that number, the Division of Neonatology has partnered with the Department of Biomedical and Health Informatics (DBHi) to tap into power of “machine learning” to synthesize multiple factors — identified by Harris and CHOP pediatrician and biomedical informatics expert Robert Grundmeier, MD — to predict which babies would get sepsis.

Factors included various lab values (oxygen levels in blood, blood cell counts, etc.), additional conditions/diseases, a central line, being on a ventilator, a variety of vital signs, perfusion rate and more — a total of 35 variables. The beauty of machine learning is that it uses computational and statistical techniques to identify otherwise hidden patterns in the data. Researchers reviewed electronic medical record data from 618 infants who were in the N/IICU from 2014 to 2017. Six of the eight models put together by Aaron J. Masino, PhD, a researcher with DBHi and the Department of Anesthesiology and Critical Care Medicine, were able to accurately predict sepsis up to four hours before doctors had recognized the baby was septic.

A path to avoiding overtreatment

Once a reliable, tested model is available — a few years down the road, Masino says — Harris sees two advantages: diagnosing infants with sepsis sooner (“We know delayed administration of antibiotics increases morbidity,” she says) and avoiding treatment of infants who don’t have sepsis.

“Now, if we see signs of sepsis, we treat presumptively because of the dangers of septic shock,” she says. “We can’t wait for a blood or spinal fluid culture to come back positive. Fewer overdiagnoses mean babies will benefit from avoiding the downsides of overtreating, such as antibiotic resistance and long-term central lines. Emerging studies show the long-term outcomes are worse for infants who get antibiotics when they’re not needed.”

“There’s still a lot to be learned,” says Masino, “but we see promise in having the computer recognize emerging diagnoses that aren’t observable by human observers.

Putting sepsis in the spotlight

CHOP recognizes the complexity and seriousness of sepsis and, in 2017, established the Pediatric Sepsis Program as a Chair’s Initiative, a competitive, internal grant program, supported by philanthropy and the hospital, that devotes extra resources to clinician-driven projects.

With Chair’s Initiative support, the Pediatric Sepsis Program has started a Sepsis Survivorship Program to formally follow up on patients. “We believe this is the first follow-up program in the nation for pediatric sepsis patients,” Fitzgerald says. “We know after discharge from the hospital, sepsis patients are at risk for physical and cognitive problems. Our goal is to identify the lingering effects and help children overcome them.”

Post-sepsis patients who are also medically complex are connected to CHOP’s Compass Care Program, which closely tracks their progress. For children who were otherwise healthy before contracting sepsis, a nurse coordinator follows up by phone two months after hospitalization and asks about specific areas of development and behavior with the parent. If the coordinator hears of issues, the child may be referred to an occupational or physical therapist or will have an expedited appointment with neuropsychologist Nina Thomas, PhD, who will evaluate the child. Thomas may recommend additional follow-up care with behavioral health or neurology specialists as needed.

“Formalized testing by Dr. Thomas will determine best route of care for each patient,” says Fitzgerald. “Children may have post-traumatic stress, with nightmares and fatigue, or they could have cognitive and attention deficits.”

Next up: Spreading the breakthroughs

Hospitals across the country, even the world, already have access to CHOP-developed clinical pathways to treat sepsis at chop.edu/pathways. Children outside CHOP’s Main Hospital will be able to benefit from what the Pediatric Sepsis Program has learned, Balamuth says, from a rollout of the Sepsis Huddle protocol to other emergency rooms across the region.

“Most children don’t come to CHOP’s ED first,” she says. “They go to their local hospital and eventually end up here.”

Since CHOP physicians staff the ED at Virtua Voorhees Hospital, it will be the first to use the Sepsis Huddle. Then a few hospitals close to the Philadelphia region will trial the protocol before it is introduced to other CHOP-affiliated community hospitals in the region.

CHOP is also working to raise the catch rate in our ED even higher than its current 96% by analyzing missed cases. The ED, N/IICU and PICU teams meet regularly to share insights.

“Sepsis can be very complicated,” Harris says, “but the stakes are high. That’s why all this work is so valuable.”