Each year, thousands of children are injured by lawnmowers. Amy hopes sharing her son’s story helps people understand the dangers and why it’s important for kids to stay inside when the mower is on. 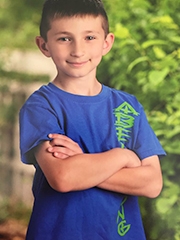 Amy dreads the sound a lawnmower makes when it runs over something it shouldn’t. It brings her back to that terrible day when her son, Brandon, was injured.

Six-year-old Brandon had been so excited about his family’s brand-new riding mower and was thrilled about the chance to ride on it with his dad. But when the mower hit a bump and lurched to the side, both father and son fell off and Brandon’s right foot landed directly in the path of the lawnmower’s blade. The blade sliced through his shoe, severed his toes, and left a large wound near his ankle. Amy had been inside the house and looked out the window to see her husband carrying Brandon toward the house.

“It was pretty gruesome,” recalls Amy. Brandon’s toes were barely hanging on.

The family hurried to the emergency room down the road from their home in Pottstown, PA, but they weren’t there long. Brandon was air lifted to Children’s Hospital of Philadelphia’s Level 1 Pediatric Trauma Center, which has an experienced team of specialists equipped to treat the most severely injured children.

“We know CHOP is one of the best hospitals in the country, so we definitely wanted him to get the best care that he could get,” says Amy.

Brandon was an active kid. He played soccer and basketball and had just started learning to play ice hockey. As Amy rode along in the helicopter, she tried to keep calm for Brandon, but worries swirled in her head: would he be able to walk and do all the activities he loved to do again? Once at CHOP, Lawrence Wells, MD, the orthopaedic surgeon on call, quickly assessed Brandon’s condition and reassured Amy that her son would be OK, but he needed emergency surgery to try to save his toes.

Over the next 33 days, Brandon underwent multiple surgeries. After the toe reattachment surgery, he was in the operating room every other day to have the wound cleaned out to prevent infection, a process known as wound debridement. He also had a vacuum-assisted closure (called a wound VAC), a type of therapy that can reduce swelling and help cleanse the wound and remove bacteria.

Through it all, Brandon remained surprisingly calm. Amy credits a lot of that to the child life specialists who helped entertain Brandon during his hospital stay.

“Child life was amazing. I think they kept us both sane,” she says. She recalls how they’d put Brandon in a wheelchair and let him race a remote control car up and down the hallway, chasing the nurses. “It was a break from all of the procedures and the painful stuff. It gave him a little bit of childhood normalcy. They were a great relief.”

Although Dr. Wells had successfully reattached Brandon’s toes, his blood flow to the toes could not be restored. Keith D. Baldwin, MD, MPH, MSPT, Associate Director of Orthopaedic Trauma at CHOP, decided the best course of action would be to amputate Brandon’s foot at the second toe joint, near the ball of the foot.

The news was a blow to the family, but Dr. Baldwin reassured them that devices could help Brandon walk, run and even play hockey as he once did. Dr. Baldwin performed the amputation and a tendon transfer surgery. In this procedure, working tendons from Brandon’s ankle were moved to replace non-working tendons in his foot so he would have better flexion. Brandon also underwent a skin graft on the wound near his ankle.

After surgery, physical and occupational therapists helped get Brandon out of bed and moving. They also taught him how to use a walker without putting weight on his foot. Brandon continued outpatient physical therapy at CHOP's Specialty Care Center in King of Prussia near his family’s home. He re-learned to walk, first in a walking boot, then in a cast shoe. After three months, he was fitted for an ankle foot orthotic (AFO) with a foam toe filler, an insert attached to the AFO that goes inside his shoe and fills the void left by his amputated toes.

When he walked with the walking boot and cast shoe, he had a bit of a limp, recalls Amy. But as soon as he put the AFO on, it was like magic.

“He walked down the hallway like nothing had ever happened,” says Amy. “It was so amazing. He was thrilled. We got in the car and he looked at me and said, ‘So, can I go ice skating now?’ And we did. We put the brace in the skate and he took off.”

Back in action and giving back 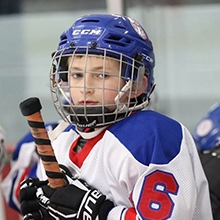 As soon as Brandon got the brace, his activity restrictions were lifted. Now 9, he’s back to doing all the things he loves like ice hockey, soccer, basketball, karate and rollerblading.

He returns to CHOP once a year for follow-up with Dr. Baldwin to look for bone overgrowth, which can happen when the bones of a growing child are amputated. The condition can require surgery. But so far Brandon hasn’t had any problems, and Dr. Baldwin has been pleased with his progress.

When Brandon wears pants, you can’t tell he has a brace on. When the brace is visible and others ask about it, Brandon’s response varies depending on how he’s feeling at the time. Sometimes he doesn’t want to talk about it, other times he’s open about what happened. Occasionally, he jokes about it, saying a shark attacked him.

Amy says Brandon’s biggest emotional hurdle is looking at his foot. While he was in the hospital, his foot was always covered with bandages. After the bandages were removed, he would wear socks all the time — even in the shower — to avoid looking at his foot. With the help of a therapist, he has just begun looking at his foot. His parents have also undergone counseling to work through the stress from the whole ordeal and adjust to life post-injury.

“There’s a lot of guilt as parents that you have to deal with,” says Amy, who says since Brandon’s injury, the family has met many families whose children have been injured just by playing in the yard when someone is mowing the lawn. She hopes sharing Brandon’s story brings awareness to the dangers of lawnmowers and stresses that parents should play it safe and keep kids inside anytime someone is mowing the lawn.

Brandon is grateful for all the doctors, nurses, therapists and child life specialists that helped him recover. A year after his injury, he organized his hockey team to host a bake sale fundraiser at the ice rink where they play. In two years, the fundraiser has brought in more than $2,000 to support CHOP’s Child Life, Education and Creative Arts Therapy program and Division of Orthopaedics.

“If it weren’t for them, I don’t know that it would have been such a happy ending,” says Amy.