When Michelle looks back on the first few years of her son Chad’s life, she remembers many joyful moments — and many difficult ones, too. 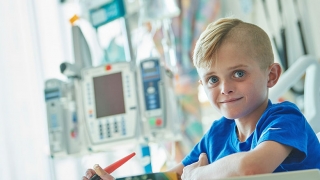 As a newborn, Chad was diagnosed with cystic fibrosis (CF), an inherited disease that affects the lungs, pancreas and other organs. He had severe reflux and breathing problems, and was constantly in and out of his local hospital. “I’d no sooner get him better, and he’d be back,” says Michelle.

Finally, when Chad was 3 years old, his gastric reflux got so bad that his local medical team referred him to Children’s Hospital of Philadelphia (CHOP) for surgery. And slowly, everything started to change.

At CHOP, Chad had a procedure — performed by Pediatric Surgeon Peter Mattei, MD, FACS, FAAP – called a Nissen fundoplication, which involves wrapping part of the stomach around the lower part of the esophagus to alleviate reflux.

Chad also received an intensive regimen of very strong IV antibiotics and special airway clearance treatments that children with cystic fibrosis receive when they have especially severe symptoms. His mom calls the process a "tune-up."

Michelle and her husband, Chris, were so impressed with Dr. Mattei, Julian Allen, MD, Chief of the Division of Pulmonary Medicine, and the rest of Chad's medical team that they transitioned all of Chad’s care to CHOP. “When we came to CHOP, it was a whole new world,” Michelle says. “The technology was all there, and the doctors all worked together to make Chad better as quickly as possible. It was amazing.”

Care at the CF Clinic — and at home

Today, 10-year-old Chad comes to the Cystic Fibrosis Clinic, part of the Cystic Fibrosis Center, several times a year for appointments with his CF team, which includes physicians, nurse practitioners, nurses, physical therapists, a social worker, a pharmacist and a nutritionist.

In addition to his clinic visits, Chad has regular appointments with Nephrologist Selasie Goka, MD, and Endocrinologist Andrea Kelly, MD, MSCE, to see if his cystic fibrosis is affecting his kidneys or his endocrine glands. He also has regular pulmonary function tests so his medical team can monitor how well his lungs are working, then adjust his medications and treatments accordingly.

At home, Chad receives breathing treatments and uses a therapy vest and an intrapulmonary percussive ventilation (IPV) machine several times a day to help clear mucus from his lungs. Like many children with CF, Chad has trouble absorbing nutrients, so he receives special formula through a feeding tube (G-tube) during the night and takes enzymes with his food to help with digestion. And because Chad is small for his age — just over 40 pounds — he also receives an injection of a growth hormone every day.

With support from Chad’s CF team and Children's Hospital Home Care, Michelle is able to manage most of his care at home, and he only needs inpatient “tune-ups” once or twice a year — a significant improvement from his early days.

Michelle always knows when it’s time: “He’ll start coughing a lot more, and coughing at night. I know him like a book — I can just tell.” Over the years, Michelle and Chad have gotten to know the Cystic Fibrosis team at CHOP very well. “Everyone is so warm and loving and caring,” Michelle says. “The nurses are amazing. Some of them are like friends.”

Chad has also become close to Child Life Specialist Kate M. Carpenter, MEd, CCLS, and Child Activity Coordinator Danielle Stewart, who help him understand what to expect during different procedures and teach him strategies to cope with pain and anxiety. “They’re always trying to find a way to make things more comfortable for him,” says Michelle.

Chad’s parents focus on keeping his life as normal as possible. He attends school from 9 a.m. to 1 p.m. during the week, and enjoys spending time with his twin brother, Chase, and his sister, Madison, 14. He also loves to ride his bike, draw, and play baseball and basketball. “He’s a go-go kid when he’s feeling good,” says Michelle. “When he’s just sitting around and feeling sleepy, those are my signs that something’s not right.”

Many drugs are in development that target the different gene mutations that cause cystic fibrosis, and Michelle is hopeful that one will be right for Chad. “As soon as a new medication comes out, the CF team knows which kids can get it,” says Michelle. “They’re always thinking ahead, and I love that.”

“In the beginning, Chad’s life was very, very rough,” she says. “But once we got settled into CHOP, his CF has been managed in such a different way. It’s been life-changing for him."

"We’re truly grateful for all the care we get at CHOP.”