When Alissa first became a mother, she eagerly embraced the Islamic view that it’s every Muslim child’s right to be breastfed for the first two years of life. She loved the physical contact of nursing and was satisfied that her baby was getting the best nutrition possible. 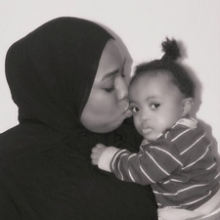 Alissa looked forward to doing the same with her second child, but Kaashif was born with medical issues that left him too weak to nurse. When he was able to take food, he spit up most of his meals.

“I nursed my older son from the time he was born to his second birthday,” Alissa remembers. “With Kaashif, right out of the gate this was a different experience for me.”

Alissa’s 20-week ultrasound revealed a large hole in the tissue separating the two sides of the baby’s heart. The condition, called complete atrioventricular canal defect, suggested the baby might have trisomy 21 (Down syndrome). An amniocentesis confirmed the diagnosis.

Alissa’s research led her to Children’s Hospital of Philadelphia (CHOP), where she learned about the Cardiac Center, the Trisomy 21 Program, and other specialized teams equipped to provide the expert care Kaashif would need. She transferred her prenatal care to CHOP’s Center for Fetal Diagnosis & Treatment and prepared to welcome her son.

Kaashif was born in May 2016 in the Garbose Family Special Delivery Unit (SDU) at CHOP. The SDU was created exclusively for mothers whose babies require specialized care or surgery shortly after birth, such as those with congenital heart defects like Kaashif.

Once Kaashif was stabilized, Alissa was thrilled to hold her newborn. She put Kaashif on her breast, but he wouldn’t latch on. His poor muscle tone, common in babies with Down syndrome, might have been to blame. He was also weakened by the heart defect and Hirschsprung’s disease, an intestinal disorder discovered at birth that causes abdominal distension and constipation.

Alissa was disappointed, but prepared. She and her husband, Tony, had already met with Diane L. Spatz, PhD, RN-BC, FAAN, nurse researcher and Director of CHOP’s Breastfeeding and Lactation Program, who taught them to use a breast pump. Among its many benefits, human milk protects babies from infection, which is especially important for very ill infants like Kaashif. Even when he couldn’t feed by mouth, Alissa pumped her colostrum and swabbed it inside Kaashif’s gums and cheeks, where he absorbed its germ-fighting properties.

Alissa pumped every two hours, determined to build her supply of milk for when her son was strong enough to nurse. Kaashif had a colostomy to move his bowels, and wasn’t able to take any food by mouth, so Alissa practiced literal dry runs with her son. She would pump, then encourage him to latch on to her breast.

At two weeks old, Kaashif was able to take his mother’s milk through a nasogastric (NG) tube. A few days later, his big brother, Aziz, fed him his very first bottle of breastmilk. Finally, at 3 weeks old, Kaashif nursed for the first time.

“I was overjoyed when I was finally able to nurse him,” Alissa remembers.

A problem, then a solution

Although Kaashif was able to nurse, he lacked the strength to finish his meals. Alissa would weigh him before and after feeding, then make up the difference by giving him pumped breastmilk through the NG tube. He would spit up most of his meals and Alissa would start over, weighing, feeding, then weighing her son again.

Despite her effort to get calories into her son, Kaashif wasn’t growing as he should. When he was a year old, Alissa tried supplementing his meals with formula, but he reacted poorly, developing a severe diaper rash. Kaashif was eventually diagnosed with food protein-induced enterocolitis syndrome (FPIES), a rare food allergy that affects the gastrointestinal tract. Alissa switched him to a hypoallergenic formula, but she knew that continuing to breastfeed her son would mean changing her own diet.

“If I was going to continue to nurse him, it meant we had to go dairy free,” Alissa says. At first she didn’t think she’d be able to do it. “Everything has milk protein in it!” But Kaashif was starting to teethe and breastfeeding comforted him.

“That convinced me to find a way,” Alissa says. She researched soy- and dairy-free recipes and changed her diet. Kaashif’s symptoms improved. 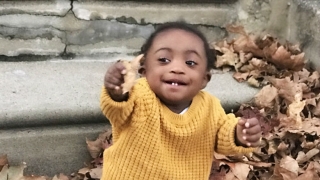 Now, at 15 months, Kaashif still suffers reflux at times and his weight goes up and down, but he is growing. He continues to see specialists at CHOP’s Main Campus and his primary care provider at CHOP Primary Care, Chestnut Hill. Alissa is relieved that she and Kaashif overcame their obstacles and she is able to nurse her son in accordance with Islamic teachings.