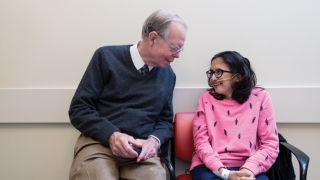 Time was running out for Arwa. Born with a severe cardiac condition, she later developed a life-threatening lung disorder; her heart and lungs were competing to see which would fail first. By age 17, Arwa’s lungs were operating at only 30 percent volume. If not treated soon, she would die.

Her doctors in Saudi Arabia couldn’t agree on a treatment plan that would address Arwa’s lung function and minimize the risk to her damaged heart. Out of options, her family sought help from halfway around the world at Children’s Hospital of Philadelphia.

Here, world-renowned experts in thoracic insufficiency syndrome, along with cardiologists and anesthesiologists, worked together to address her unique needs. In March 2016, doctors surgically implanted two vertical expandable prosthetic titanium ribs to enlarge her chest wall, straighten her spine and give her lungs more room to breathe. Seven months later, the devices were expanded.

Now back home in Saudi Arabia, Arwa is doing well. She is just one of thousands of children with complex disorders who have a brighter future after coming to CHOP — thanks to innovative programs like the Wyss/Campbell Center for Thoracic Insufficiency Syndrome (TIS).

So far, four programs have been identified as Frontier Programs. The Cancer Immunotherapy Program and the Lymphatic Imaging and Interventions Program were named in 2015. The most recent selections are the Center for TIS and the Center for Pediatric Inflammatory Bowel Disease.

A genetic approach to IBD

In the past 30 years, inflammatory bowel disease (IBD) — especially in young children — has gone from rare to relatively common.

“In the past few years, there’s been an explosion in our knowledge of the genetics of IBD and in our treatment options,” says Robert N. Baldassano, MD, Director of CHOP’s Center for Pediatric IBD. To date, genome-wide association studies have implicated more than 200 locations on chromosomes where gene mutations causing IBD might be found.

At one time, the only therapy to treat IBD was steroids. Today, about a half-dozen medications are used to treat IBD in children. Knowing a child’s genetics and microbiome helps determine which medication will work best — true personalized medicine.

That’s why the IBD team is working to standardize genetic and microbiome testing, as well as determining the best way to share the knowledge with the world. It is also looking to partner with industry to develop new therapies for IBD, so that CHOP’s expertise is included early in the drug-development process.

When CHOP researchers identified DC3R, a genetic mutation that affects about 10 percent of its IBD patients, the Hospital approached MedGenetics, a private pharmaceutical company, about collaborating on a new medication to block the pathway that causes inflammation in so many children.

“If it’s successful,” Baldassano says, “CHOP will have helped create an entirely new drug for kids with IBD, which is pretty amazing.”

A fix for a missing rib

Physicians and scientists at Children’s Hospital of Philadelphia have been on the front lines of discovery for decades. In the case of surgeon Robert M. Campbell Jr., MD, now Director of CHOP’s Center for TIS, it was a sick baby in the late 1980s who sparked his desire to better understand complex spine and chest-wall deformities that affected the baby’s breathing — and to find a way to fix them.

Campbell’s research led to the naming of a new condition — thoracic insufficiency syndrome — and the creation of the vertical expandable prosthetic titanium rib (VEPTR), an adjustable, implanted device that takes the place of a child’s missing ribs, corrects severe spinal curves and helps stabilize the spine. What was an experimental treatment in 1995 is now the only FDA-approved treatment for TIS. Arwa is just one of many who can vouch for its success.

“Our understanding of thoracic insufficiency has changed a great deal in the past 25 years,” Campbell says. “Thousands of children who had life-threatening illnesses are now living into adulthood, thanks to VEPTR and improved medical care.”

But Campbell and his growing team have plenty more work to do. “We’ve just started the nation’s first basic science lab dedicated to TIS,” he says. Frontier Program funding has accelerated the pace of discovery — and is allowing the center to serve more patients. Campbell says he’s anxious to put his “inventor’s cap” back on.