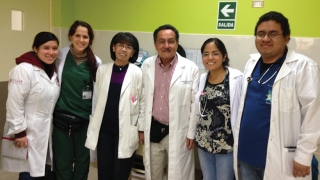 H. Jorge Baluarte, MD, center, with some of the residents and nephrology fellows he trained during his 6-month sabbatical in Lima, Peru H. Jorge Baluarte, MD, has visited Peru, the country where he was born, many times since he left to pursue his medical career in the United States. The nephrologist at The Children’s Hospital of Philadelphia has lectured at hospitals when he was visiting relatives in Lima, the capital, and extended consulting advice to nephrologists treating patients with end-stage kidney disease pre- and post-transplantation.

Still, something nagged at him. “I was educated in Peru, and then I left right after medical school,” Baluarte says. “I’ve always wanted to give back; I wanted to contribute in a bigger way.”

He got that opportunity by spending a six-month sabbatical from April to September 2014 in Lima, working daily with pediatric nephrologists from the Universidad Nacional Mayor de San Marcos and Universidad Peruana Cayetano Heredia, which has the only pediatric renal transplant program in the country. He split his time between the two, going on patient rounds, discussing patients, and lecturing, and working with attending physicians, residents, and students.

“I really admire what they do there, given all the limitations they have,” Baluarte says. “Some days they run out of medication because the shipment didn’t come in. They ask the families to buy more medicine.”

He was especially moved by a grandmother who slept each night on the floor next to her grandchild’s hospital bed. He learned she had been sleeping there for three months, so he bought her a small mattress and brought it to the hospital. “But by then, the child had been discharged and they had left,” he says.

The medical system is divided into a government-paid system for the poor and a private system for wealthier Peruvians. The government pays so poorly that to make ends meet, government doctors also work in private clinics on the side in the afternoons and evenings.

“They work 13 hours a day,” Baluarte says. “While I was there, the physicians went on strike for 3 months over pay. Patients had to sneak into the back doors of private clinics to be treated. It’s the poor people who cannot pay who suffer.”

Kidney transplants, so common in the United States, are rare in Peru. In a country of 33 million people, only 98 kidneys were donated in 2013. “It’s partially ignorance and partially cultural resistance,” he explains. “Even if someone has their driver’s license marked as an organ donor, the families will refuse to allow it.”

The few organs available are rarely allocated to children; perhaps 3 or 4 children are transplanted each year. “That leaves children on dialysis for years and years,” Baluarte says. “Physicians train parents how to do peritoneal dialysis at home. If the family lives outside the capital and there is no local nephrologist, the family has to relocate to Lima to save the child.”

He shared protocols used at CHOP, which averages 13 to 15 kidney transplants a year, “but they are limited because they don’t have the means to apply them.” Still, he hopes his time in Peru made a difference and will lead to improved care for children with kidney disease.

“I am convinced that to reach your goal in life, you have to remember your roots, where you came from,” Baluarte says. “I don’t mean just family and relatives. I think the schools you attended are very important, too. I owe a great deal to the University of San Marcos, San Fernando School of Medicine; it’s a very important root.”