Appointments and Referrals
215-590-2730
Request an Appointment

Hudson seemed like any other healthy newborn. He was excited to eat, made lots of dirty diapers, and slept a lot. But seven days after birth, when his parents, Kristen and Jason, switched his formula, Hudson suddenly stopped pooping. His belly became hard and round like a bowling ball and was so swollen that his skin had red stretch marks. 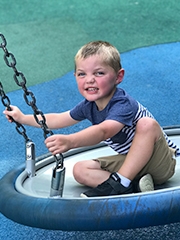 The pediatrician near their home in Gilbertsville, PA, about an hour west of Philadelphia, sent him for an X-ray of his stomach and initially thought it was just gas that would pass once Hudson had a bowel movement. But when Hudson threw up bile the next day, his parents and the pediatrician became concerned.

Confirming the diagnosis of Hirschsprung’s disease

The pediatrician suspected Hudson had a rare and very severe condition called Hirschsprung’s disease and recommended the family take Hudson to an emergency room immediately. Children with Hirschsprung’s disease lack ganglion cells in their digestive tract, which are necessary to trigger muscles to squeeze and relax to move digested food through the intestines. Left untreated, the condition can be life-threatening.

The family drove directly to Children’s Hospital of Philadelphia (CHOP). As they made the trip, the pediatrician called ahead to CHOP’s Emergency Department (ED) to inform physicians there of the suspected diagnosis.

“Hirschsprung’s is so rare that a lot of doctors don’t know it,” says Kristen. “We were really blessed that our pediatrician noticed the signs and called ahead.”

At CHOP, Surgeon Holly L. Hedrick, MD, took control of Hudson’s care and evaluation. Hudson was admitted to the hospital and underwent a number of tests including an abdominal X-ray, contrast enema, and suction rectal biopsy — all of which confirmed the diagnosis.

Fortunately, only a short segment of Hudson’s intestines were affected by the disease. The plan was to give him a colostomy (a surgically created opening in his bowel), which would allow him to poop into a small bag. Once his swollen intestines healed, Dr. Hedrick would perform a pull-through procedure, an operation in which the abnormal segment of the intestines is removed.

Giving families confidence to care for Hirschsprung’s disease at home

While CHOP clinicians taught Kristen and Jason how to care for the colostomy at home, Child Life specialists helped educate their 4-year-old daughter, Ryleigh, about the colostomy in an age-appropriate way.

“Child Life was fantastic,” says Kristen. “After Hudson’s surgery, we weren’t sure how to explain the colostomy bag to our daughter. Child Life came and taught her about it using a special doll that had an ostomy. They taught her how to be a great big sister to Hudson.”

The family returned to CHOP when Hudson was 5 months old for his pull-through procedure. Two months later, Dr. Hedrick reversed the colostomy, closing the opening in Hudson’s bowel and abdomen.

Since then, Hudson has been doing well overall. He had to be hospitalized a few times when he spiked a fever to monitor for signs of enterocolitis, a life-threatening condition that can occur in children who have had a pull-through procedure. But fortunately, he never got it. 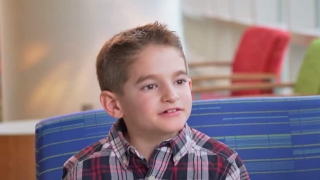 He has been taking stool softeners to prevent constipation, which makes his stool very watery. This wasn’t an issue when he was in diapers, but now that he’s 4, his parents are working with Dr. Hedrick and Myron Allukian, III, MD, attending pediatric surgeon, on bowel management strategies.

For now, Hudson has daily enemas — a technique that pushes the stool out. The care team — led by Joy Kerr, BSN, MSN, CPNP, CRNFA — spent hours teaching Kristen and Jason how to perform the technique so they were comfortable doing it on their own at home.

“CHOP does a fantastic job educating parents,” says Kristen. “I don’t know that you have too many places where doctors will spend that length of time with you, helping you learn to care for your child.”

The enema allows Hudson to stay accident-free all day so he won’t have to worry about going to the bathroom or having accidents when he goes to kindergarten next year. 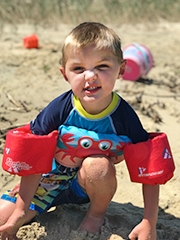 Hudson has experienced some fine motor and gross motor delays. He has undergone two rounds of occupational therapy at the CHOP Care Network Specialty Care Center in King of Prussia, which is a little closer to his family’s home. He also has done physical therapy through early intervention. The family recently returned to CHOP for a bowel clean out procedure.

He’s undergone three surgeries in just four years of life and faces other daily challenges most other kids his age don’t have to think about, but he’s a happy, energetic boy. He plays T-ball, does gymnastics, loves watching Paw Patrol, plays with LEGO® and puzzles, and loves his big sister and Spike, his pet fish.

His doctors — and his parents — have high hopes for his future.

“Their support has been fantastic,” says Kristen.

Appointments and Referrals
215-590-2730
Request an Appointment