After battling cancer three times, Jacob’s life was in peril for a fourth time: His lung capacity was failing, and he required a lung transplant. Because his lungs were so ravaged, other programs refused to perform the transplant, thinking he wouldn’t survive the procedure. Then the family came to Children's Hospital of Philadelphia (CHOP), where they received an answer that changed everything. 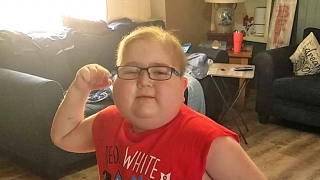 When Jacob was 4, he began having episodes when he would vomit, then grab his head and scream. His parents, Beth and Erik, reached a pediatrician who happened to have some oncology experience and recognized the possibility of a brain tumor. At an emergency room near the family’s home in eastern Wisconsin, “They knew within a half-hour that it was a tumor,” says Beth. Specifically, it was medulloblastoma, a brain cancer most often found in children. Jacob underwent brain surgery to remove as much of the tumor as possible, aggressive chemotherapy, a second brain surgery to remove the residual tumor, more chemotherapy, and a stem cell transplant. “We were good for a year,” says Beth.

More than two years after ending treatment, Jacob was scheduled for a test to check his thyroid hormone level. By mistake, a complete blood count test was ordered instead. The results showed his blood count levels were alarming, and he was diagnosed with acute myeloid leukemia. “That click of the wrong button saved his life,” says Beth, “because it was caught early.”

After finishing chemotherapy, Jacob’s bone marrow had been severely damaged by the toxic drugs, so he needed a bone marrow transplant to restore his bone marrow. This time, his body rejected the donor cells, which is called graft-versus-host disease. “It attacked his liver, skin and stomach,” says Beth. “But we weren’t aware it had attacked his lungs.” After six months of Jacob having breathing difficulty and multiple hospital admissions, a biopsy confirmed that the disease had damaged his lungs. “It was quite severe,” says Beth. “The only option was a double lung transplant.”

The family was given a list of medical centers that perform pediatric lung transplants. They first visited one in the Midwest, where after a week of tests, the surgeon refused to attempt the procedure, concerned that Jacob’s body was not strong enough to survive it. “We felt absolutely defeated,” says Beth.

Jacob’s oncologist in Wisconsin refused to give up, but the different pulmonologists who saw Jacob had diverging opinions of whether to keep trying. Eventually three more lung transplant programs were contacted, thanks to one of the pulmonologist who didn’t give up on Jacob. One of the programs was CHOP.

As they waited to hear back, Beth and Erik began preparing for the worst. “We had an end-of-life meeting,” explains Beth. Twenty minutes before that meeting, CHOP’s Lung Transplant Program called the pulmonologist: They were willing to consider Jacob’s case. Beth and Erik learned this as they walked in expecting to sign “do not resuscitate” papers.

Within a few days, Jacob was cleared to travel, despite his lung function being below 14%. The family came to CHOP for a week of tests. “We were told at the start that if they ever thought a transplant wasn’t possible, they would be honest and tell us right away,” Beth recalls. “At the end of the week, we were told he was being listed for a donor. We were shocked! But they were like, ‘We said we would have told you if it we weren’t going to accept him!’”

“It was just a whole different attitude than the other place we went,” says Erik.

‘We have really good lungs’

Although CHOP’s outlook gave the family hope, Jacob remained very sick as he waited for a donor to be located. “His numbers were terrible, and the doctors were talking about a ventilator, and I’m trying to hold them off,” says Erik. “We were going meal to meal.” The fact that Jacob was still able to eat, despite his extreme weakness, was a hugely helpful factor.

The transplant was successful. 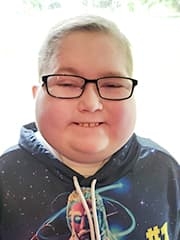 Jacob endured intense physical therapy to recover. “We knew it would be tough, but he had to do whatever he needed to do,” say Beth. “We gave the therapist permission to push him — we said, ‘If you need to be the bad cop, do it.’ It felt horrible. It was a lot of physical therapy.”

He’s missed a significant amount of school, but Jacob, now 13, is back to being a regular kid. He plays video games and chats with friends, although between his sickness and the pandemic, he hasn’t seen his friends in person since his 11th birthday. “He’s an old soul,” says Beth. “No kid should be thinking about what his hemoglobin is.”

Over the years of Jacob’s cancer treatments, the hospital in Madison, Wis., had become the family’s home away from home. Beth says:

“Now CHOP is our home away from home.”

“It’s a 16-hour drive each way, and we’re happy to do it.” The family can’t say enough good things about everyone from the Environmental Services staff to the cafeteria staff.

“Taking on Jacob was a chance,” says Beth. “CHOP was the place that wasn’t afraid to take that chance.”