Emein’s sickle cell disease has caused a host of complications, including nephrotic syndrome. Specialists throughout Children’s Hospital of Philadelphia (CHOP) work together to keep the impact of his symptoms low and his quality of life high. 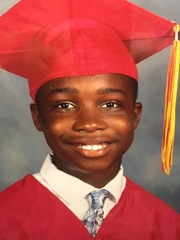 Emein has struggled since birth with sickle cell disease, a disorder of the red blood cells. The condition can cause pain, infection, stroke and other life-threatening complications, and Emein has suffered his share of them. From a splenic sequestration, in which sickled red blood cells become trapped in the spleen, to recurrent acute chest syndrome, to strokes.

He suffered the strokes when he was 10 years old. All he remembers is he was in school and suddenly had a really bad headache. He was taken to the local emergency room and, from there, was medevacked to CHOP. An MRI revealed he had suffered two strokes. The first had gone unnoticed, but likely occurred a week prior. The second stroke caused major damage, including weakness on the left side of his body (hemiparesis), and mental and balance issues.

He spent three months in the hospital undergoing tests and recovering. He had to use a wheelchair to get around and relearn basic tasks like going to the bathroom. During his time there, doctors discovered another complication of his sickle cell disease: a form of nephrotic syndrome called membranoproliferative glomerulonephritis. The condition can cause increased protein levels in the urine, which can lead to swelling and high blood pressure.

A coordinated approach to care

Emein was put on medication to treat his nephrotic syndrome. Now 17 years old, his blood pressure is normal and his kidneys are in excellent condition. He still struggles with some of the other complications from the strokes. He has weakness on his left side, so he wears a brace on his left leg and arm. And the mental effects of the strokes caused him to regress a bit academically, says his grandmother, Beverly.

His team at CHOP includes members of the stroke team, nephrology, psychology and rehabilitation. Over the past few years, they have worked together to keep the symptoms from his various conditions at bay, while keeping the medications he takes to a minimum. He gets physical, occupational and speech therapy through CHOP and his school, and the stroke team’s education coordinator goes with Emein’s grandmother to meetings at school to help develop his Individualized Education Plan (IEP).

“He receives excellent care from CHOP,” says Beverly. “They all work together. The nursing staff is polite and courteous; the doctors are awesome. They give their undivided attention to him as well as myself. They address any questions we have. We don’t feel like we’re being rushed. Any tests that they order for him, when the tests come back, we sit down and talk about them and they allow me to have input. If I don’t understand the medical terminology, it’s broken down into layman’s terms so I do understand. They are just all-around professionals. From the time I walk in to the time we leave, I feel like they heard us and I don’t have to worry when I come home because my questions are answered.”

“I feel like Emein is in the best place he can be in terms of his medical needs.”

Rising above his struggles

Before the strokes, Emein loved to play basketball. The strokes rendered him physically unable to play, but he still wanted to stay active. That yearning led him to an activity he’d never heard of or played before, but now loves: bocce. He has been playing on his high school bocce ball team for the past three years, and is now team captain.

“With bocce he is still able to be athletic,” says Beverly. “He’s done very well with it.”

Emein has been through a lot. Despite his struggles, he is a happy young man. He wakes up with a smile and goes to bed with a smile, says his grandmother. He has lots of friends at school and in his neighborhood. He’s in a life skills program at his high school and is a member of Best Buddies International, an organization that unites individuals with intellectual and developmental disabilities. Sometimes his school even has him sit at the main desk to greet people when they come in, because he’s so friendly.

“He’s a good kid,” says Beverly. “He has a smile that lights up a room. He doesn’t take anything for granted. Going through what he has gone through has made him appreciate life and that things can happen quickly and some things you just don’t have control over.”