NK is a 17-year-old otherwise healthy girl with a 1-year history of progressive bilateral groin pain, right worse than left. She was seen a year prior for an avulsion fracture of her right anterior superior iliac spine sustained while running. She reports that her current pain seems to have started since that injury, but that it feels somewhat different in character than it did initially. Her pain is worse with upright activities, including just walking and climbing stairs. She has become quite limited and often lies down on the floor in pain after a long school day. Standard anti-inflammatories are no longer helpful. 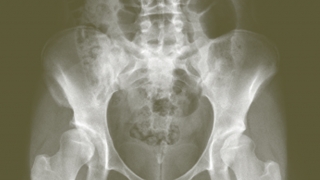 Acetabular dysplasia refers to a deficiency or shallowness of the hip socket, which results in poor “coverage” of the femoral head. This can cause pain and disability through several mechanisms. On a static basis, an insufficient or shallow hip socket results in increased pressure at the edge of the acetabulum when the hip is bearing weight. On a dynamic basis, an insufficient acetabulum allows excessive movement of the femoral head within the hip joint, which in turn exerts shear forces on the articular cartilage. Both these factors can result in pain and early osteoarthritis of the hip.

The acetabular labrum, which functions like an O-ring around the hip socket, often tears or degenerates as it unsuccessfully tries to compensate for the lack of bony coverage. Acetabular dysplasia is therefore a major cause of hip symptoms in the mature adolescent and young adult populations. In fact, some studies indicate that between 40% to 50% of all osteoarthritis of the hip (in adult patients requiring total hip replacement) can be traced back to underlying acetabular dysplasia.

The true cause of acetabular dysplasia is unknown, but genetic factors clearly play a role. In many cases, acetabular dysplasia represents residual shallowness in the mature acetabulum from infantile hip dysplasia. Most cases, however, occur in patients with no previous history of dysplasia as an infant, but likely represent mild forms of the disease, which are not identified based on current screening practices.

Like infantile hip dysplasia, patients with acetabular dysplasia are more commonly female. Patients typically present between 10 and 25 years of age with gradually increasing groin, thigh, or lateral hip pain. Symptoms are usually activity related, and as a result, this condition is often seen in highly active female athletes. Some patients report feeling “unstable” or that their hip gives out on them. Many patients have increased flexibility, and a slight limp is common.

Plain radiographs, particularly an AP X-ray of the pelvis, are generally diagnostic. The presence and severity of acetabular dysplasia can be determined by measuring the amount of the socket that covers the femoral head. It is also important to judge the obliquity of the weight-bearing surface of the hip. These findings, however, can be quite subtle, and it is crucial that specialists in the area of pediatric, adolescent, and young adult hip disorders, such as those at The Children’s Hospital of Philadelphia, evaluate the imaging studies directly as it is common for this condition to be missed by primary care providers, general orthopedists, and radiologists alike. Advanced imaging such as CT and MRI are helpful to more fully define bony anatomy and to determine the presence of coexisting cartilage and/or labral injury. 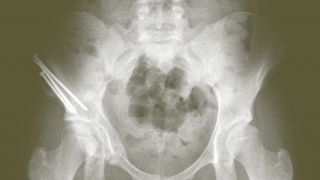 1B: Post-surgery view of the pelvis Treatment is individualized, but generally begins with a course of activity modification and anti-inflammatory medications. Physical therapy can also be helpful to strengthen compensatory muscle groups. For certain patients, ultrasound- or X-ray-guided hip injections can confirm the diagnosis as well as provide some therapeutic value. For those patients who do not respond to these measures, definitive treatment consists of a periacetabular osteotomy—an operation that detaches and repositions the hip socket to correct the mechanical environment, offload the hip, and preserve the joint (see Figure 1B).

These technically difficult procedures are performed at only a few centers in the country, such as the Young Adult Hip Preservation Program at CHOP. In the hands of an experienced surgeon, they are highly successful in improving symptoms and preventing or postponing the need for total hip replacement later in life.