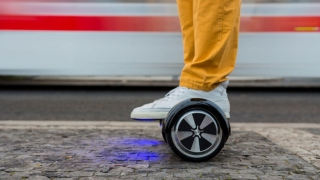 Since the 2015 holiday season, you’ve been hearing about fires, explosions and other accidents associated with hoverboards, the popular self-balancing scooter. You might think this couldn’t happen to you or your child, but the impact on hoverboarders is all too real.

“At CHOP, we have seen a 700 percent increase in hoverboard injuries among boys and girls equally,” says Apurva S. Shah, MD, MBA, an orthopedic surgeon at CHOP and attending physician in the Hand and Arm Disorders Program.

Dr. Shah tracked hoverboard injuries for a study he is presenting at the American Academy of Pediatrics National Conference in October 2016. According to the study, hoverboards are associated with distinct injuries, the two most common being:

Other assorted injuries include broken ankles and concussions. And even with all of the news about the dangers, Dr. Shah expects to see hoverboard-induced injuries continue to rise, especially as the next holiday season approaches.

He points out that commonsense precautions would likely cut the risk of injury in half. Such precautions include: wearing a helmet, using wrist guards, and avoiding hand placement in the “unsafe” zone between the wheel and the wheel-well. Adult supervision is also strongly advised.

But here’s another wise track to take: Just say “no” to hoverboards! The established risks are disturbing enough. Dr. Shah raises two other scenarios that could pose a danger:

The Consumer Product Safety Commission (CPSC) may ultimately ban them, too. The agency is currently investigating all reasons for the fire hazard, including the large-size lithium battery that powers them. Depending on what scientists uncover, the CPSC will either ban hoverboards or push for more safety standards.

In the meantime, says Dr. Shah, “Don’t purchase a hoverboard until safety standards have improved. And don’t let your child use one without adult supervision and taking the necessary precautions, including a helmet and wrist guards.”