Published on Oct 05, 2017 in Orthopaedics Update

J.A., an 8-year-old girl from Saudi Arabia, came to Children's Hospital of Philadelphia with an osteosarcoma that covered 70 percent of her left humerus. Four months later, she has regained function of her arm and, by transplanting one of her fibulas to replace the humerus, her arm is expected to continue to grow and develop.

A.K., a 14-year-old boy and avid cyclist, presented with left leg pain after cycling. A needle biopsy confirmed an 8 cm osteosarcoma on his left tibia, just below the knee. Six months after resecting the tumor and ensuring leg strength with a vascularized fibula transplant from the opposite leg supporting a cadaveric allograft, he is back on his bike.

In addition to her appointment at CHOP, Weber is Chief of Orthopaedic Oncology in the Department of Orthopaedic Surgery at the Perelman School of Medicine at the University of Pennsylvania, Director of the Sarcoma Program in Penn’s Abramson Cancer Center, and Second Vice President of the American Academy of Orthopaedic Surgeons. She cares for both children and adults with bone and soft tissue tumors, making the transition to adult care seamless for patients in the Philadelphia area who move on to Penn Medicine as they age.

While Arkader is one of only a handful of surgeons in the United States with formal training in both pediatric orthopaedics and orthopaedic oncology, he has uncommon expertise in minimally invasive surgical techniques for limb preservation and correction.

A case of delayed diagnosis

The case of J.A. highlights the importance of early and accurate diagnosis. In her home county of Saudi Arabia, she was initially seen for a minor fracture that was thought to have occurred through a benign bone cyst. After a few months of follow-ups and worsening of pain and function, she underwent a surgical biopsy that confirmed the diagnosis of osteosarcoma. The surgical biopsy was complicated by infection and an open wound. She was started on chemotherapy, but there were no good options for local control at the treating institution. She traveled to Philadelphia for limb-saving surgery.

Unfortunately for J.A., her tumor was very large and involved ¾ of her entire humerus, including the growth plate near the shoulder, responsible for 80 percent of the growth of the arm. With tumor control, function and growth in mind, the CHOP team opted to perform a wide resection of the tumor followed by vascularized free fibula grafting, preserving the top of the fibula to make a new shoulder joint and preserve growth. Arkader handled the tumor resection and stabilization of the bone graft with shoulder joint reconstruction, and Stephen J. Kovach, MD, a microsurgeon, handled the graft harvest and delicate microvascular repair of the vessels to keep the graft alive, while avoiding permanent damage to the nerves surrounding these structures. This was an approximate eight-hour procedure.

At her four-month follow-up visit just prior to returning home to Saudi Arabia, she was continuously tumor-free, the fibula graft has united well with the humerus, and she is participating in intense rehab to recover motion and strength. She will return to CHOP next summer for a checkup, and will be followed locally in the interim. 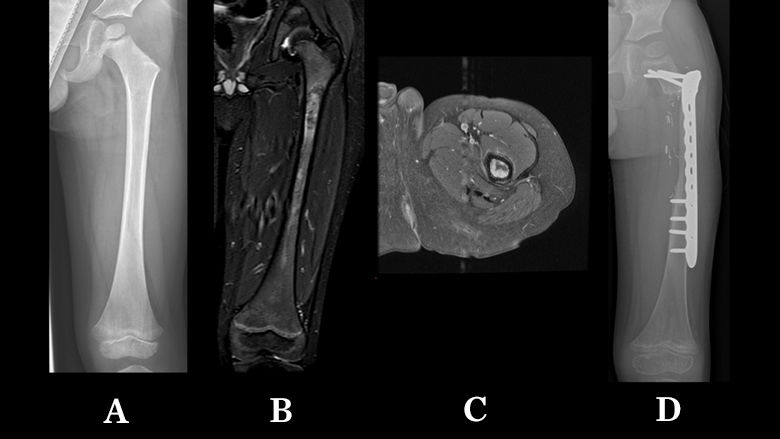 From left: (A) Plain radiograph of the femur demonstrating minimal area of lucency in the proximal femur; (B) MRI better defining the area of marrow involvement; (C) Axial MRI showing absence of a large soft tissue mass; (D) Post-op radiograph demonstrating the vascularized fibula spanning the defect created by wide resection of the tumor.

In A.K.’s case, MRI scans before and after initial chemotherapy showed the osteosarcoma had come close to the physis (or growth center in the upper tibia) but spared the knee joint. Given his age and passion for cycling, preserving the knee joint was paramount. “If we don’t preserve the joint, the patient will face a replacement joint surgery every 10 years or so for life,” says Weber. “After awhile, there is less available bone to work with, and the patient is at higher risk of infection or other complications with each invasive procedure.”

Weber performed a tricky cut between the knee joint and the growth plate (physis) to remove the tumor safely and maintain the joint. Using a combination of a cadaveric allograft and biological reconstruction with a vascularized fibular graft, Weber ensured strength and durability of the lower leg. Kovach performed the microsurgery required to bring in the opposite fibula to enhance bone healing by transferring a living bone.

Without the possibility of preserving the growth plate in the diseased leg, another concern was dealing with potential leg length differences in his later teenage years. “If you can’t save the growth plate, we move on to making the limbs grow to equal length, either by stopping the growth in the non-tumor limb or, later, performing limb-lengthening surgery on the affected limb or using a rod that grows with the child using magnetics,” says Arkader.

After consultation with A.K. and his family, exploring the risks and benefits of future leg-lengthening surgery, and taking his current height into consideration, the consensus decision was for Dr. Weber to halt growth in the healthy leg by stopping growth at the opposite physis. In all, it was an eight-hour surgery followed by many months of additional chemotherapy.

At A.K.’s six-month checkup, the upper bone graft junction had healed. The lower site has not completely healed yet, likely due to the anti-healing effects of chemotherapy. He is still restricted from jumping and running, but he reported a return to cycling with no loss of strength/range of motion of the knee. 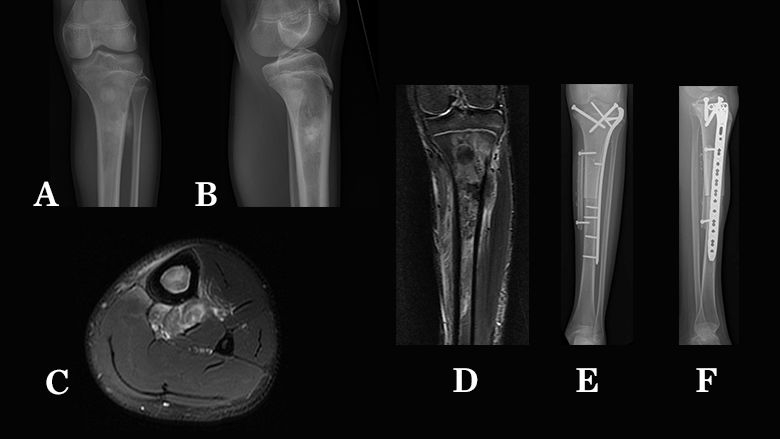 (A) X-rays of the front and (B) side of the tumor, with white areas in the upper tibia indicating the bone formation from the osteosarcoma. The soft tissue extension of the tumor from the bone is shown on (C) an axial MRI and (D) a coronal MRI. (E) Post-op front and (F) lateral X-rays demonstrate the combination of cadaver bone, vascularized fibular graft and steel rod.

To refer a patient to our program or to discuss a case, call 215-590-1527 or email orthotumor@email.chop.edu. Patients with suspected bone tumors are seen at CHOP within 24 to 48 hours of referral.