The dedication of the Congenital Hyperinsulinism Center's experts led to Danny's diagnosis with a rare form of HI.

Carla Velez is a nurse. So when her then-4-year-old son, Danny Figueroa, complained, “If I don’t eat something, I’m going to die,” five minutes after finishing a big meal, she tested his blood sugar on a home glucose meter. It was low, so she took him to their local emergency room. There doctors said there was nothing wrong with Danny that feeding him more wouldn’t fix. 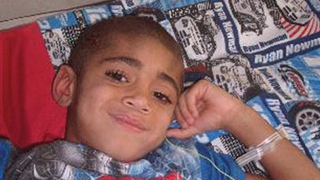 That wasn’t good enough for Carla.

“I knew something was wrong, so I insisted they confirm his low blood sugar with labs and hold him for observation,” she says. “The labs came back showing his sugar was at 35 mg/dL, so they put him on intravenous dextrose [sugar water], but it  only elevated his level to 50.” A normal blood sugar level is between 70 and 100 mg/dL.

The pediatrician on call said she’d never seen hypoglycemia (low blood sugar) in a young child fail to respond to dextrose. “She told me, ‘If he were my child, I’d go to CHOP.’”

Carla immediately drove Danny from Lancaster, PA, to The Children’s Hospital of Philadelphia, where he was soon under the care of endocrinologist Charles Stanley, MD, founder of CHOP’s Congenital Hyperinsulinism Center.

Usually children with suspected hyperinsulinism (HI) are infants, but Danny didn’t fit the profile. A thorough history showed that even as a baby he wanted to eat pretty much constantly. As a toddler, he snacked frequently. When he started preschool and didn’t have access to food as often, he would fall asleep in class — once even during a loud school assembly — and would be difficult to wake up.

Dr. Stanley initially thought Danny’s hypoglycemia was caused by an insulinoma, a tumor in the pancreas, but he also sent blood samples for genetic testing for the most common HI genes. The genetic test came back negative. Danny then underwent a special PET scan pioneered at CHOP and available at only a handful of pediatric hospitals worldwide, designed to identify focal HI. But the results showed no focal lesion. “It was shiny all over,” Carla says, “so it didn’t help the diagnosis.”

To control Danny’s sugar levels, in addition to intravenous dextrose, he was started on the front-line oral medication diazoxide, but he couldn’t keep it down. He tried octreotide, an injectable medication, but that didn’t work. Finally, he had a gastrostomy tube (g-tube) placed and received diazoxide directly into his stomach. That, along with continuous dextrose-20 percent overnight via his g-tube, finally stabilized his blood sugar.

When an insulinoma was ruled out as a cause of Danny’s hypoglycemia, Dr. Stanley ordered a second genetic screening, looking at a broader spectrum of HI genes. The results showed Danny had a genetic mutation in glucokinase (GK), and he was diagnosed with GK HI — a rare form of this already-rare disease. Of all the children seen in CHOP’s HI Center, GK HI accounts for only 2 percent of the cases. Danny was one of the first identified with GK HI at the Center and, luckily, has a mild form that can be medically managed.

Learning how to manage GK HI

Between testing and getting his sugar under control, Danny spent two months at CHOP during his initial stay in 2007. It allowed Carla to get up to speed on HI and how to treat it. “In nursing school, we learned all about diabetes and nothing about hypoglycemia,” she says. Carla has put her knowledge to good use as an ER nurse. When a patient came in with hypoglycemia and seizures, she suggested doctors consider HI, which ended up being his diagnosis.

Now 13, Danny manages his GK HI by taking diazoxide when he wakes up and by eating extra-high-carbohydrate snacks before exercise and going to bed. “He hasn’t exactly outgrown his HI, but we are more educated about how to manage it,” says Carla.

Most of the time, Danny is a typical ninth-grader, playing board games and sports, swimming, riding his scooter, and going to the movies. His HI is now managed by a local pediatric endocrinologist who trained at CHOP. However, when Danny needs a change to his regimen, he comes back to CHOP for a fasting study.

“We won’t go to an endocrinologist who doesn’t know about HI,” Carla says, “and CHOP knows HI best — and knows Danny best, too.”