An unrelated infection led to a rare diagnosis of glucokinase HI — not only for Isabella but also for her mother, Teresa.

She was a clingy baby, but now at 26 months Isabella Januska is determined to be “Miss Independent.” 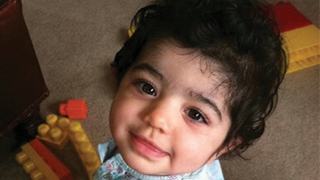 “She’s adamant about doing things herself these days,” says her father, Bobby. “She shares a bunk bed with her 4-year-old sister, Sophia, and Isabella taught herself how to climb up the ladder to the top bunk. All we hear is, ‘Do it myself.’ But I understand why she was clingy before. We were afraid to put her down for a year.”

When Isabella was 5 days old, she developed a high fever. Her mother, Teresa, and Bobby took her to their local hospital, University Medical Center of Princeton at Plainsboro, which has pediatricians from The Children’s Hospital of Philadelphia on staff as one of the community hospitals in the CHOP Care Network.

Isabella was immediately put on IV antibiotics, but when that didn’t lower her elevated white blood cell count, pediatricians sent the family to Children’s Hospital. “The initial diagnosis was rhinovirus, and they noted her blood sugar was a little low,” Bobby remembers. “When we got to CHOP, they started to give her sugar water to bring it up, but the more sugar she got, the lower her blood sugar plummeted. Within a short time, they suspected hyperinsulinism.”

The Januskas had come to the right place. CHOP is home to the Congenital Hyperinsulinism (HI) Center, the largest center in the United States treating children with this rare (1 in 25,000 to 50,000 live births) condition. The HI team diagnosed Isabella’s HI and set out to determine which type of HI she had, which guides treatment.

Genetic testing revealed she had a defect in the GCK gene, meaning she had glucokinase (GK) HI. The beta cells in her pancreas have a lower set point for insulin secretion. Since parents’ blood is also genetically tested, Teresa found out — for the first time — that she also has GK HI, although she is more mildly affected.

“I’ve had low blood sugar all of my life, to the point where doctors will have my labs retaken because they can’t believe how low it is, given that I have no symptoms,” says Teresa, who had never heard of HI before. “I never gave it a second thought until we discovered Bella’s battle with HI.”

While Isabella’s rhinovirus was being treated, her endocrinologist, Andrew Palladino, MD, focused on a treatment plan that would stabilize her blood sugars. She responded to the front-line HI medication, diazoxide, and was able to pass an eight-hour fasting test. After spending three weeks in the Hospital, Isabella went home.

“Dr. Palladino and the whole HI team were fantastic,” Bobby says. “The endocrinology nurses were amazing. They really taught us what we needed to know about HI and about how to keep Isabella’s sugar level up.”

It ended up being a short stay at their home near Princeton, NJ. Isabella spiked another fever and was treated at CHOP for two more months for meningitis.

Now, Isabella’s HI is controlled with two oral diazoxide doses a day, a small dose of diuretic (a side effect of diazoxide is fluid retention), careful monitoring of her food intake and frequent glucose tests. “When she’s eating regularly, she’s OK,” Bobby says. “Her sugar level is lowest after she sleeps eight hours or more, but once she has her diazoxide and eats, she’s fine.”

When Isabella isn’t singing or painting, she’s jumping fearlessly into the pool and running to keep up with Sophia.

“We were actually fortunate that she got a fever in the first place or her HI might not have been diagnosed until something drastic, like a seizure, happened,” Bobby says. “I like to believe that God had a plan that sent us to CHOP, where there are the leaders in HI diagnosis and research. We found out there’s no other hospital in the world like CHOP.”