Published on May 11, 2015 in International Update , Neonatology Update

A term female infant was born at a community hospital through meconium-stained amniotic fluid and, while initially vigorous, required admission to the NICU shortly after birth for hypoxia. She was started on noninvasive support with CPAP. At approximately 3 hours of life she developed seizures and required intubation for worsening hypoxemic respiratory failure. She was loaded with phenobarbital. A spot EEG showed excessive sharp waves, and her MRI/MRA was normal. Her respiratory status did not improve and required high-frequency ventilator support and inhaled nitric oxide. On her third day of life she met ECMO criteria and was transferred to CHOP.

On admission, with ECMO available, a dose of surfactant was administered and the team was able to wean her supplemental oxygen and thus avert ECMO. She was pharmacologically paralyzed. Neurology was contacted due to the history of seizures and continuously monitored video EEG (vEEG) was initiated. While monitored by specially trained EEG technologists and epileptologists, her vEEG revealed ongoing subclinical seizures. These seizures were difficult to control and required the addition of levetiracetam to escalating phenobarbital doses. Her ongoing care was a coordinated effort between neonatology and a small group of critical care neurologists. When her cardiorespiratory status stabilized, a joint decision was made to obtain repeat MRI due to the difficulty in controlling her seizures, which were felt to be atypical by the neurology group. MRI was obtained and MRA was added with the infant on the table after real-time suspicious for constrictive vasculopathy. Findings showed narrowing of the distal internal carotid arteries, proximal anterior, middle, and posterior cerebral arteries, and extensive collateral vessel formation (see Fig. 1). 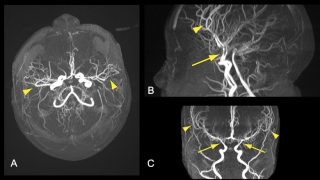 Figure 1. Select images in the axial (A), sagittal (B), and coronal (C) planes from MR angiogram sequences demonstrating narrowing of carotid arteries (long arrow) and resultant diffuse collateralization (short arrows) consistent with moyamoya. These findings were consistent with congenital moyamoya, an extremely rare condition that increases risk of stroke for these patients.

Upon this diagnosis, the Neurology Stroke Team was consulted, and on their recommendation treatment with aspirin was initiated for stroke prophylaxis. Her phenobarbital was weaned. After a period of stability, she had 1 clinical seizure requiring a repeat MRI to evaluate for stroke, which was not present, and repeat vEEG. Neurosurgery was consulted due to the possibility of future need for vascular re-implantation as a treatment for her moyamoya. Her case was discussed in a multidisciplinary Neuro-N/IICU conference including neonatologists, ICU neurologists, stroke specialists, and neurosurgeons, and a comprehensive discharge plan was put into place, including developmental follow-up and future repeat MR angiogram.

This case highlights the importance of multidisciplinary collaboration represented by the Neonatal Neurocritical Care Program. This infant presented with a severe, but seemingly routine, neonatal diagnosis of meconium aspiration and seizures from presumed hypoxia; in fact, she had an extremely rare congenital vascular disease diagnosed due to the close collaboration between services and technology uniquely available at CHOP. Management of her ongoing subclinical seizures was enhanced by continuously reviewed vEEG and the identification of her vasculopathy was only possible due to the expertise of the neuroradiology group. Her future therapies will be planned in close collaboration between the Stroke Team and neurosurgery to allow her to achieve her maximum developmental potential.