Published on Jan 18, 2017 in Neurosciences Update

Many neurological and psychiatric conditions are characterized by problems with cognition and associated with disruptions in how patients encode information in their brains. We are only beginning to learn which mechanisms may mediate these difficulties with cognition. Understanding of these processes is critical to developing new therapeutic approaches to correct cognitive issues and improve the lives of patients experiencing these symptoms.

The 2014 Nobel Prize in Medicine was awarded to John O’Keefe, May-Britt Moser, and Edvard Moser for their discovery of “a positioning system, an inner GPS in the brain that makes it possible to orient ourselves in space, demonstrating a cellular basis for higher cognitive function” (excerpted from the Nobel Prize press release).

Taking advantage of this seminal discovery, one novel approach that has been adopted at laboratories within Children’s Hospital of Philadelphia’s Research Institute is to watch cognition occurring in real time in models of neurologic disease to visualize this GPS system in the brain during spatial navigation. Understanding how this emergent cognitive function may be disrupted in models of epilepsy, psychiatric disease, and autism leads to targeted, directed therapies to improve brain function. 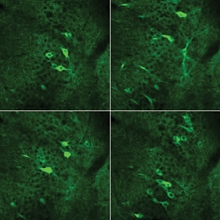 Fluorescent images taken at varying times depicting neuronal activity encoding spatial position, i.e., a GPS system in operation within the hippocampus. In these studies, mice are created with genetic and/or induced conditions sharing features with patients afflicted with neurologic or psychiatric conditions. These model mice are then immersed in a virtual environment, very similar to a video game, in which their movements change the spatial perspective they experience, allowing them to navigate in mazes under their own control. Neurons within the brains of these mice are engineered to express modified proteins, which transform electrical activity into flashes of fluorescent light.

The combined, net result of all of these approaches is an integrated view of the GPS system within the brain. As they navigate through this immersive environment, brain impulses are translated into flashes of fluorescent light within individual neurons. Use of advanced microscopic techniques to image these neuronal flashes allows real-time visualization of the GPS system in operation in these models of neurologic disease.

Through use of these advanced techniques to measure features of this emergent cognitive function, investigators are able to understand at unprecedented levels of resolution precisely what has failed in these models of neurologic and psychiatric disease. It also enables testing of new therapies targeted toward correcting these failures. The hope is that, using this advanced, integrative approach to better understand what has gone awry in central nervous system disorders, it will be possible to target the specific disruptions responsible for compromised cognitive performance, with fewer adverse side effects.