Published on Feb 05, 2018 in Neurosciences Update

The Pediatric Epilepsy Program at Children’s Hospital of Philadelphia (CHOP) is one of the largest and most interdisciplinary programs of its kind in the world, with expertise covering all aspects of epilepsy management from initial diagnosis and testing to the most complex and technologically advanced epilepsy surgery.

We believe in a multidisciplinary effort to determine an individually tailored, minimally invasive approach to each child’s epilepsy to achieve full seizure control while minimizing risk and discomfort and maximizing quality of life. We are capable of performing remote monitoring of children in countries all over the world and collaborate with colleagues to provide the most advanced care available.

At the core of the Epilepsy Program are 16 pediatric epileptologists, all of whom have specific training and focus their practice on epilepsy management. Our team also includes nurse practitioners, nurses, psychologists, neurosurgeons, neuropsychologists, social workers, genetic counselors, clinic coordinators, research coordinators, fellows, and electroencephalogram (EEG) technologists.

Standard anti-seizure medications control seizures in about two-thirds of children. Based on patient tracking of seizures and potential adverse effects, medication adjustments are made if seizures persist or side effects occur. Some patients are refractory to an initial 1 to 3 anti-seizure medications, promoting more advanced diagnostic testing that can further guide individualized patient management.

Selected patients need genetic testing, along with genetic counseling, metabolic studies, or blood/CSF studies for infectious, inflammatory, or auto-immune causes. Sometimes continuous EEG monitoring for several days or even weeks is required since EEG data acquired during a seizure can help improve management tailored to a specific patient.

The CHOP EEG Lab is one of the largest in the United States, with more than 5,400 routine EEG studies, nearly 400 ambulatory EEG studies, and more than 3,500 days of inpatient EEG monitoring each year. The lab has 27 board-certified EEG technologists, 18 routine EEG machines, 17 ambulatory EEG systems (including 3 with home video capability) and 22 inpatient EEG monitoring systems.

About one-third of children with epilepsy have continued seizures despite adequate trials of several standard anti-seizure medications. In addition to continued attempts at standard management with anti-seizure medications, additional strategies are considered, including epilepsy surgery, vagus nerve stimulation, and the ketogenic diet. The first step is determining exactly which areas of the brain are causing the seizures. We employ whole head MEG, functional MRI, and transcranial magnetic stimulation to localize epileptogenic regions and map sensorimotor regions to improve surgical planning and guide family counseling. 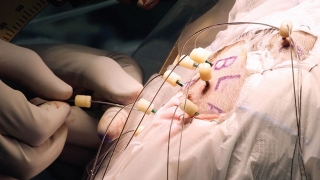 We then monitor those areas with robotic-assisted stereoelectroencephalography (sEEG), a minimally invasive approach that consists of electrodes stereotactically placed through small, 2 mm incisions into particular brain regions to monitor the epileptogenic circuit and precisely localize the origin of the seizures. This entails a stay in our state-of-the-art epilepsy monitoring unit of a few days to a few weeks, depending on seizure frequency.

Photo: Robotic-assisted stereoelectroencephalography (sEEG) is a minimally invasive approach that consists of electrodes stereotactically placed through small, 2 mm incisions into particular brain regions to monitor the epileptogenic circuit and precisely localize the origin of the seizures to determine if the area of the brain causing the seizures is amenable to removal.

We offer a variety of other minimally invasive surgical options for several epilepsy syndromes. Children with gelastic seizures are offered laser ablation, in which a laser fiber is placed through a 3 mm incision very precisely to disconnect a hypothalamic hamartoma from the brain. Some patients with atonic seizures or “drop attacks” benefit from a partial or complete corpus callosotomy; for some patients, this is done with a similar laser ablation technique.

For children with hemispheric diseases, such as in utero stroke, Rasmussen’s encephalitis, hemimegalencephaly, Sturge-Weber, and others, we offer functional hemispherotomy through a small craniotomy, in which we disconnect all the affected cortex of the brain from the normal hemisphere and the brainstem. In patients with seizures coming from many locations or all over the brain, or for patients who have some persistent seizures after brain surgery, we offer vagal nerve stimulators.