Three-year-old Nicholas was playing tag with his brothers when the two older boys ran inside crying. “Something is wrong with Nicholas!” Tracie Anderson ran outside and found her youngest son lying face down in the grass. 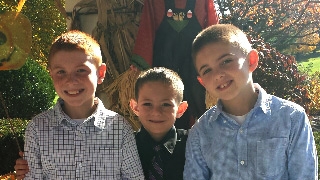 “I rolled him over and he was shaking, his lips were blue and he wasn’t breathing,” she says. “It was the scariest three minutes of my life.”

Neighbors called 911. Police revived Nicholas and rushed him to a local hospital in New Brunswick, NJ. Doctors there confirmed Nicholas had had a seizure, and further testing confirmed he had epilepsy.

Epilepsy is a neurological condition that causes bursts of abnormal electrical signals in the brain. These signals trigger repeated seizures (a seizure that happens only once is not usually diagnosed as epilepsy). And for some people, like Nicholas, the cause of epilepsy is unknown.

For six months after Nicholas’ first seizure, he was in and out of his local hospital in Central New Jersey. “The doctors tried 12 different epilepsy medicines — every brand, every drug cocktail they knew about,” Tracie says. “Nothing worked.”

In fact, Nicholas got worse. At one point, he was having more than 30 seizures a day, and the intensity of each seizure was unpredictable. “He was listless and just lying in bed. He wasn’t acting like our little boy anymore,” Tracie says.

At an epilepsy support group meeting, the Andersons heard about another family’s experience with The Children’s Hospital of Philadelphia’s (CHOP) neurology team and with neurologist Eric Marsh, MD, PhD. CHOP’s Division of Neurology is ranked among the best in the nation by U.S. News & World Report and is world-renowned in the field of epilepsy research.

In March 2011, Tracie and her husband, Brian, brought Nicholas to CHOP for a full day of imaging, testing and physical examinations. At the end of the day, the family sat down with Dr. Marsh to review the results of testing and past treatments, and discuss how to proceed.

“Dr. Marsh thought Nicholas was a perfect candidate for the ketogenic diet,” Tracie says. “My husband and I had never heard of it.”

Learning about the Ketogenic diet

The ketogenic diet is very high in fat, with about 90 percent of calories coming from fat. Ketogenic meals involve drinking lots of heavy cream and eating high-fat foods such as mayonnaise, butter, oil, nuts and soy.

This high-fat, low-carbohydrate combination changes the way energy is stored in the body, affecting the brain in complex ways, according to Dr. Marsh, who is also an attending physician with CHOP's Pediatric Regional Epilepsy Program.

“The diet forces the brain to use ketones instead of glucose for energy,” Dr. Marsh says. “For children with intractable epilepsy, up to 30 percent will have an excellent response to the ketogenic diet.”

“I’ll be honest, we resisted initially,” Tracie says. “We thought feeding Nicholas a ketogenic diet would be a huge lifestyle change for our whole family. We didn’t know if we could do it — or if it would even work.”

But as Nicholas’ seizures continued, his parents decided they needed to try.

At CHOP, board-certified neurologists work closely with specially-trained neurology nurses and dietitians. Together, they provide care and monitoring to patients, as well as step-by-step instruction and support for families as they begin the transition to the ketogenic diet.

Today, families in similar circumstances have an additional resource: CHOP’s Keto Kitchen, the first facility of its kind in the country. At the Ketogenic Kitchen — which opened in 2013 thanks to the generous gifts and collective efforts of dozens of CHOP families and donors — families can practice preparing ketogenic meals under the supervision of CHOP physicians and nurses.

For Nicholas, the ketogenic diet treatment was a success. “Within one week of being on the diet, Nicholas’ eye-hand coordination improved, his cognitive skills improved. He wasn’t so sickly looking. And he was acting like our kid again,” Tracie says. “My husband and I knew we did the right thing putting him on the keto diet.”

After two years, Nicholas’ family and his care team jointly decided to wean him off the high-fat, low-carbohydrate diet. “His condition had improved that much,” Tracie said.

Today, Nicholas averages 1-2 seizures a month — quite a change from the 30-plus seizures a day he had before starting treatment at CHOP. And he doesn’t take any medication regularly.

A second-grader at Hazelwood Elementary School, Nicholas’ growth and development has caught up to his peers and he’s on-level for reading and math. Gym is his favorite subject. He plays Little League baseball and enjoys riding his bike around the neighborhood.

“We owe 100 percent of Nicholas’ success to Dr. Marsh and the ketogenic diet that CHOP offers. He’s a normal kid now,” Tracie says. “I wish more people knew about the keto diet. For us, it was our last hope. For Nicholas, it was our saving grace.”