Two days after Kaelyn was born, she had a seizure and was transferred to The Children's Hospital of Philadelphia. Her mother Corinne recalls the story of learning Kaelyn had suffered a stroke and the months immediately after.

I never knew a day could have so much meaning behind it. I went to my routine prenatal appointment and the doctor said I would have my baby by the end of the week.

Little did I know, only a day later I was having pains so I went to bed early. 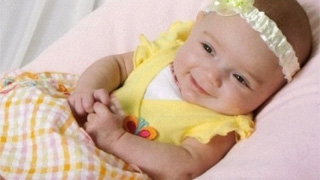 The next morning, June 6, 2009, at 2 a.m., my water broke. Twenty minutes later we were out the door and on our way to the hospital. Once we arrived they checked my cervix and did a test to tell if it was my water that broke or not and it had indeed broke. By 6 a.m. my contractions were unbearable and I got an epidural. The doctors got prepared and I started pushing. At 7:47 a.m. my precious daughter Kaelyn was born. She received a 9/9 on her Apgar scores, had ten fingers, ten toes — everything a mother could ask. Life was amazing.

I had a healthy baby girl; little did I know what the next 48 hours would bring.

On the morning of June 8, I was breastfeeding Kaelyn and she suddenly stopped and was staring into mid-air moving her right arm like she was having a convulsion on the right side of her body. I immediately called the nurse, who took her away.

The nurse brought her back 20 minutes later and said Kaelyn was fine. Just as the nurse was swaddling her back up, Kaelyn was having the convulsions again. The nurses took her right to special care. About a half hour later, a doctor came in and told me they needed my consent for a CT scan and a spinal tap and that Kaelyn was having seizures and they didn’t know why.

At this point the doctor didn’t give her more than 24 hours to live.

Going to CHOP for answers

Finally, after what felt like a lifetime, I was allowed to go see her. She was hooked up to a million machines. A few hours passed and the doctors came to me and told me that she would have to be transferred to The Children’s Hospital of Philadelphia (CHOP), that the tests showed something but they didn’t have the capability to tell what it was. I was devastated.

I went home, took a shower, packed a bag and arrived back at the hospital just in time to see my little girl put in a transport incubator and be transferred to CHOP.

At this point I had not slept in more than 24 hours and my eyes were irritated from not sleeping and crying for hours.

Finally, after what felt like a lifetime but was only an hour and a half, we arrived in Philadelphia. My little girl was already hooked up to more machines with about two dozen doctors surrounding her.

After listening to the doctors talk amongst themselves they came over to me and asked what I saw happen, which is when I began to break down. Once I finished telling my story, the doctors went over their suspicions and told me that Kaelyn had to have numerous additional tests to see if what they suspected were the problems.

Finally after two MRIs, tons of blood work, an echocardiogram, and numerous other tests, they had answers. My little girl had a stroke, something I never could imagined happening to a baby.

The cause of her stroke, to this day, is still unknown. Kaelyn would be going home on seizure medicine to prevent her from having any more seizures and would have to go back for periodic check ups.

The night before we were going to be discharged, nine days after arriving, Kaelyn was going to have her first bath in a real bath tub; little did we know that this would set back her discharge time.

That night Kaelyn’s temperature dropped to the danger level and we would stay another few days. The doctors were not sure of the cause of her temperature dropping, so again more tests were done to come up again with no cause. Three days after that we were finally going home.

Life at home after pediatric stroke

Once we arrived home I was very cautious and uptight about everything. Every diaper change I checked her temperature and it seemed like I was always watching her and freaked out about every little move she made. Kaelyn was a very difficult baby, different than she was while in the hospital. She was very inconsolable and would not sleep by herself. I did not expect that.

About a week later, Early Intervention came and evaluated Kaelyn and determined that she would benefit from their services. She would have a physical therapist come out once a week, but it would not start for a few weeks.

Not even a month after we were home we were back in the hospital, Kaelyn had viral meningitis. After what felt like an eternity, but was only a week, we were discharged. While in the hospital the doctors determined Kaelyn had an inflamed gastrointestinal track, acid reflux and a milk and soy protein allergy. All this meant that she had to go on a special formula and more medicine.

Some setbacks, but hope for the future

A few weeks later we had her check up at CHOP with the neurologist which went great. Kaelyn had her EEG done and they determined that I could wean her off of her phenobarbital, since she had no signs of recent seizures.

The speech therapist said that all of her feeding problems were related to her stomach issues and not neurological, which was easy to fix. That same week I took her to the gastroenterologist and they gave her a higher dose of acid reflux medicine, which helped a lot.

Just when I had my hopes up and thought everything was going well, her physical therapy started and I got some bad news. The therapist recommended that Kaelyn go see an ophthalmologist and that we need to work on tummy time, as she was favoring her right side.

Right now Kaelyn is just over two months and is doing well besides her tummy time problems, which we are slowly working on. Her acid reflux is taking time to get under control but she is doing a lot better.

She still will not sleep by herself all night, but is doing a lot better with it. She will let me put her down and not cry, but still has times when she cries and nothing will stop her. She has a few developmental delays which are nothing major. They include her favoring the right side, not having very good head control when on her belly or while sitting up and focusing and tracking problems.

I want the best of everything for my daughter and hope that one day she will grow up to be a strong, independent woman. I wish that my mom were here to see her new granddaughter and be with me to help me through the hard times, but unfortunately my mom passed away before I was even pregnant.

My daughter’s birth however, will always have extra meaning to me because it has now brightened up a day that was for two years a very sad day. Kaelyn was born on the 2-year anniversary of my mom’s death. I feel that my mom was there with us in the delivery room — even if just in spirit — and that she has been here through everything keeping an eye on her new grandchild.