Nathan was just 2 days old when his local hospital found fluid on his brain and he was transported to The Children's Hospital of Philadelphia. Here, his mother, Christine, shares the story of how she and his family learned he'd suffered a massive stroke in utero. 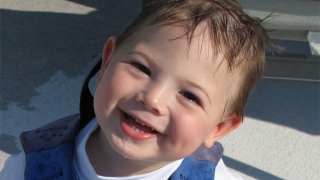 On Feb. 10, 2007, I sat in CHOP's Newborn/Infant Intensive Care Unit (N/IICU) after experiencing a whirlwind of a day.

My 2-day-old son Nathan was transported to The Children's Hospital of Philadelphia from our local hospital, after an ultrasound of his head revealed “fluid on the brain.”

After two days of blood work, CT and MRI/MRA/MRV scans, EEG, EKG and countless doctors, nurses, residents and fellows coming to examine Nate, it was finally time for the diagnosis.

Our nurse had just told me the doctor was on her way. I remember sitting in the rocking chair looking around the room at all the tiny babies hooked up to far more machines than I ever thought possible, and wondering how on earth this could be happening.

I saw the entourage of medical professionals coming my way and for a few seconds tried to will myself to be anywhere but where I was at that very moment. My stomach was in a knot and the surge of adrenaline I was experiencing was almost too much to handle in those few seconds before the doctor spoke.

“A stroke? But he’s a baby … how can a baby have a stroke?” were the only words I could seem to put together in my head.

She then continued to say that Nathan also had hydrocephalus, which was most likely caused by the hemorrhage, and may need a shunt inserted into one of the brain ventricles which would continuously drain the accumulating cerebral spinal fluid (CSF) in his skull.

I was so thankful I had the foresight to grab a notebook and write down what was being said because there was so much information being given at that moment there was no way I was able to even absorb a small percentage of what was being conveyed to me about my baby.

It was not until two days later when I was once again rereading my notes that I realized I could not ignore the phrase “massive stroke” any longer and asked the attending doctor if she could go into more detail about his injury.

When the doctor returned later in the afternoon she asked if I would like to view his brain CT scan but I declined. My heart just wasn’t ready at that moment.

So, to convey the amount of tissue loss, she drew a circle which was the brain and a line down the center separating the left and right hemispheres. She then began to color in the area where previous brain tissue had now been replaced with fluid.

Apparently, when blood enters the actual brain tissue, it disintegrates, leaving nothing behind but a fluid-filled empty space.

When I realized she had colored 95 percent of Nate’s left hemisphere black, I closed my eyes in disbelief, only to open them a minute later to see she had also filled in the middle portion of Nate’s right hemisphere.

“He hardly has anything left” was all I could say, “how is he alive? Why did this happen? Could I have prevented it?”

I was just firing questions at her through my tears, and it was that day I heard the phrase I came to loathe over the next weeks and months: “We just don’t know."

Nate’s NICU stay lasted only a few more days until it was determined that an obvious cause for his stroke did not exist and that he did not need immediate shunt surgery (this would occur eight weeks later).

When I found out Nate was to be discharged from CHOP’s N/IICU I was griped with fear. I remember telling his nurse that he couldn’t leave because I didn’t know how to care for a child with such an extensive brain injury.

“Honey, you will be just fine," she said. "Take this precious baby home and love him and treat him like there is not a thing wrong with him. He will let you know if there is a problem.“

She then gave me a big hug and told me she knew I was a good mom and that I could handle this situation and anything that would present itself in the future.

But instead I smiled and thanked her for her kind words and walked out the door, secretly wracked with shame over my feelings and hating myself for thinking of me first and Nate second. It took time but I eventually pushed through the guilt as I found my focus shifted effortlessly towards Nate and what he needed as he developed and grew.

Guilt behind the diagnosis

At a group meeting a year later I finally had the courage to talk about my experience those first months and I was shocked to look around the room and see almost every other mom shaking her head in agreement.

Although I was elated I was not alone, I also felt a bit of anger well inside me because moms are supposed to support one another, and if I had just one mom tell me my feelings were normal, those first months would not have been filled with as much despair and anguish.

So now when I speak to new parents after diagnosis, I make sure I share my experience.

Diagnosis is hard enough without the added weight of needless guilt.

Nathan is a remarkable little boy with a huge smile that lights up the room when he enters. He has some form of therapy each day during the work week and has learned that if he looks at his therapists a certain way and flashes his dimple, he may just get lucky and they will give him a break!

As I watch my child grow and work so hard to do the “little things” in life, the joy in knowing he has the determination to work at a task until he figures it out, has overcome the sadness I used to feel throughout the first year when I would watch him struggle to do things that came so naturally to his peers.

I cope by staying “in the present” and try not to think about the future. However, it has taken me a very long time to come to a place of acceptance and to learn to live in the now. I have stopped obsessing over what he will be like, because each child is different. Science is unable to tell me my son’s abilities or disabilities at any point in his life. The brain is an amazing organ that has the ability to compensate in some areas for damage and that is clearly evident when you look at Nate.

“We just will have to wait and see,” are the words that over the past 30 months I have come to loathe.

At birth, the doctor was not able to tell me if my child would walk, talk, interact with his siblings and peers or understand the world around him. However, time has proven Nate is proficient in all of these tasks and he continues to amaze his physicians and myself with all of his accomplishments.

At 30 months old, Nate has a “mild” cognitive delay of six months and is expected to be integrated into a “typical” classroom setting by the time he reaches Kindergarten.

Hope in the form of a boy

At 2½ Nate’s challenges are mostly physical and are evident in his inability to functionally use the right side of his body. He has right-sided hemiplegia and this is most apparent by his tightly clenched fist and limp when he walks. Yet he has continued to make strides towards more independent finger and hand control. He is able to walk very well with only the aid of a right leg brace.

To me, Nate is hope.

Over the past months and years, seeing him accomplish tasks has replaced my fear and anguish about his future with hope, acceptance, strength and determination.

It is my wish that those who read Nate’s story are able to draw strength from his innocence and perseverance, and will understand that although our children are not following the “typical” journey, there is always hope.

Without it, we are lost. Without it, there is despair. With our children we must believe and trust in the brain's ability to compensate for some of the damage caused by stroke.