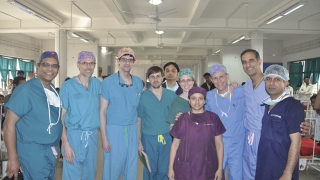 At children’s hospitals in the United States, it goes without saying that there will be pediatric specialists in almost any area of medicine. But in the developing world, such specialists are rare.

That’s a big part of why this January, a team of urologists from CHOP and two other children’s hospitals will make its eighth annual trip to Ahmedabad, India, to provide life-changing surgery for dozens of children. In the process, they also help to train Indian surgeons in advanced techniques and care.

They target a problem called bladder exstrophy. “It’s a devastating condition,” says Aseem Shukla, MD, director of the Minimally Invasive Surgery Program for the Division of Urology, who has made the trip every year.

“The children were born with their bladders on the outside of their bodies, so they’re incontinent and completely soaking wet all the time," he adds. "They can’t go to school, and often people avoid them because of the smell.”

Each day of the two-week trip, the team operates on two or three patients. It is a major reconstruction: Each surgery takes 10 hours.

Urology Division Chief Douglas Canning, MD, will be making his second trip this year, along with orthopedic surgeon B. David Horn, MD, who is going for the first time. While in India, they will take part in a conference dedicated entirely to bladder exstrophy, interacting with more than 100 Indian pediatric surgeons to discuss and demonstrate some of the newest surgical repair techniques.

The doctors pay for the trip partially out of their personal funds, but they hope in the future to rally philanthropists to support this kind of international outreach.

“Most of these patients are the poorest of the poor,” Shukla says. “They are so thankful for whatever we can do.”