Published on Dec 15, 2014 in Endocrinology and Diabetes Update

A 13-year-old girl presents with dysphagia. She is otherwise healthy with no significant past medical history. She reports no prodrome of symptoms, only that she awoke with a sharp pain in  her neck and then noted that a corner of her orthodontic retainer was missing. Unable to find the missing piece, her parents brought her to the hospital for evaluation. There is no known exposure to ionizing radiation or family history of thyroid disease. 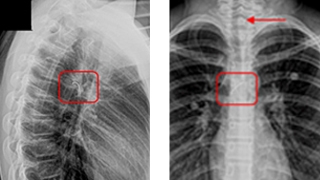 Figure 1: Plain chest radiograph demonstrating right-tracheal deviation and esophageal foreign body. On arrival to the Emergency Department the patient is in mild discomfort but is breathing comfortably and able to control her secretions. A CXR confirms the location of the missing retainer piece, but is also significant for right-tracheal deviation (Figure 1).

PTC is a tumor that arises from the follicular cells of the thyroid, the cells responsive to thyroid stimulating hormone (TSH) and capable of transporting iodide into their cytoplasm for the production of thyroid hormone (T4 and T3). Within pediatrics the highest incidence of PTC is found in Caucasian girls, 15 to 19 years of age, where thyroid cancer is the second most common malignancy following Hodgkin’s lymphoma. The majority of patients are asymptomatic at the time of diagnosis, with the lesion incidentally discovered during unrelated physical exam or non-thyroid head and neck imaging. Sporadic disease is most common, however risk factors include exposure to ionizing radiation, most commonly secondary to treatment of an unrelated malignancy, and others (Table 1).

At the time of diagnosis 60 percent of patients have lymph node metastasis and up to 15 percent have pulmonary metastasis. Complete surgical resection, to include total thyroidectomy with compartmental lymph node dissection, is the most critical initial step of management. Surgery should be performed by a high-volume thyroid surgeon — defined as a surgeon who performs 30 or more thyroid surgeries per year, the majority for thyroid cancer — in order to balance the benefits of a lower incidence of persistent disease with the risks of hypoparathyroidism and/or recurrent laryngeal nerve (RLN) damage. Post-operative staging is used to determine which patients may or may not benefit from I131-radioiodine therapy.

Because PTC displays an indolent rate of growth and maintains a differentiated state, disease-specific mortality is low with survival over 30 or more years estimated at 95 percent. Disease-specific morbidity, however, is not as favorable secondary to a high-recurrence rate. Efforts to improve the diagnostic testing for tumors with indeterminate cytology and pathology, to ensure the optimal stratification of surgical resection, and to define the appropriate dose and timing for radioiodine are critical to decrease morbidity.

After preoperative staging with neck ultrasound and axial imaging, the patient described underwent a total thyroidectomy with central and bilateral, lateral neck dissection; 29 of 47 lymph nodes were positive for metastasis. Six weeks later the I123-DxWBS with SPECT/CT revealed uptake in the right paratracheal region as well as in the upper region of the left neck (Figure 3). 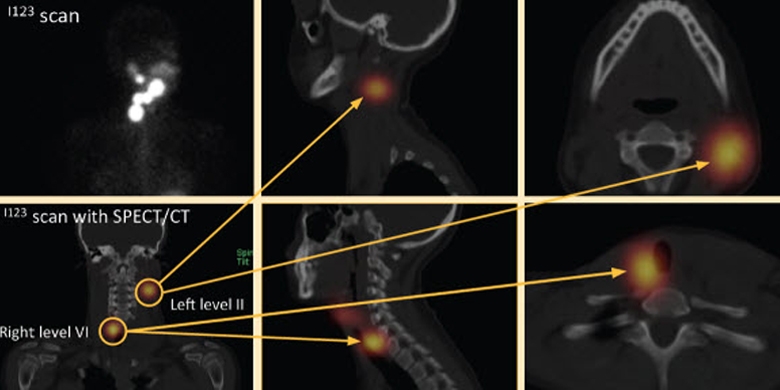 (Figure 3: The use of hybrid imaging, I123-whole body scan with SPECT/CT, allows for accurate localization of persistent papillary thyroid carcinoma. Subsequent intra-operative lymph node mapping with methylene blue or radio-guided surgery may then be used to resect remaining disease.)

Targeted surgical resection of the two cervical regions was performed using radio-guided dissection. Post-operative parathyroid function was intact, and there was no damage to the RLN. Our patient subsequently received 106 mCi of I131. Fifteen months after the initial treatment, an undetectable TSH-stimulated Tg and negative I123-DxWBS confirmed remission. She is currently maintained on TSH-suppressive therapy and is followed with serial surveillance labs and imaging.

Thyroid cancer in pediatrics has a favorable outcome, even for patients who present with significant metastasis. The creation of pediatric-specific guidelines for the evaluation and management of thyroid cancer, as well as the creation of regional referral centers with a multidisciplinary approach to care, is necessary to optimize evaluation and management and to decrease disease-specific morbidity.