Jake, age 15,  loves music  and is a really  good drummer  — so good that  he auditioned  for and was  accepted into the  Arts Academy at Benjamin  Rush, a competitive Philadelphia  magnet school. He has also been selected to the All-Philadelphia  Orchestra throughout middle school  and high school, and was recently  recruited for and accepted into the  Community Music Scholars Program  at Temple University’s Boyer College  of Music and Dance, which provides  jazz and classical music instruction  for school-age children in Philadelphia. 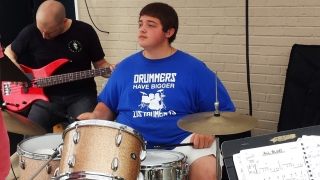 To talk to him and hear him play, you would never know that Jake is hearing impaired. At age 3, he was diagnosed with bilateral profound sensorineural hearing loss.

“I was devastated and in shock and knew I just needed to get him the best treatment and care,” says his mom, Ann. After the diagnosis, she immediately contacted CHOP’s Center for Childhood Communication.

The center connected the family with early intervention services and a team of audiologists got Jake set up with hearing aids. Jake had minimal hearing in his left ear. With the help of the hearing aids and the audiologists and speech therapists at the center, Jake learned to talk and became interested in music. He got his first drum set when he was about 5 years old. But his hearing continued to decline year after year.

By the time Jake was 9 years old, his hearing had deteriorated so badly that he became a candidate for cochlear implants, surgically implanted electronic devices that provide sound to a person who is profoundly deaf or severely hard of hearing. His left ear was implanted that year, and his right ear was implanted at age 13. Ken Kazahaya, MD, medical director
of CHOP’s Pediatric Cochlear Implant Program, performed both surgeries.  Thanks to Dr. Kazahaya’s minimally invasive surgical approach, the atural hearing in Jake’s left ear was reserved, a rarity in most cases.  With the cochlear implant, Jake can now hear almost perfectly in that ear.

The cochlear implants allowed Jake to hear sounds he had never heard before, like the flutes in the orchestra, high notes on a piano, and even birds.

“Getting the surgery done was a really good thing in my life,” Jake says.  “Before the surgery, I could still hear, but it wasn’t the same as now. Now I can hear every note.” The implants have also helped with some speech issues he was having.

Now in 10th grade, Jake has his sights set on the future, namely a career as a drummer. Not “the stereotypical drummer like a rock star,” he notes, but a musical performer in an orchestra. He hopes to attend the Juilliard School or Berklee College of Music.

“My message to Jake every day is you can do anything you want to do if you put your mind to it,” says his mom. “When I look back, I’m just amazed and proud of how far he’s come and what he’s accomplished with respect to having such a passion for something related to hearing. He’s an excellent musician. When I hear him play, I’m blown away. I think it’s a miracle. I have no explanation for it.  I never would have dreamed this.

“I cannot speak highly enough of the care that we received at CHOP,” she adds. “Their treatment, their compassion, their knowledge, their expertise has changed our lives.”