When he was born at 23 weeks’ gestation, Shawn Friedman weighed little more than 1 pound. But the tiny baby was a fighter and grew quickly. By the time he was 3 months old, he was strong enough to go home with his parents, Jordan and Danielle, in Green Brook, NJ. 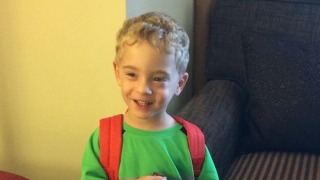 When he was born at 23 weeks gestation, Shawn Friedman weighed little more than a pound. But the tiny baby was a fighter and grew quickly. By the time he was 3 months old, he was strong enough to go home with his parents, Jordan and Danielle, in Green Brook, NJ.

The only outward sign of Shawn’s fragile beginning was a tiny voice. “His voice was very soft and breathy,” says Danielle. “Even his cries were faint.”

The Friedmans accepted Shawn’s voice as a unique trait, and thought he’d eventually grow out of it.

But when Shawn was 7 months old, he began to resist feeding and Danielle noticed her baby seemed short of breath when he lay on his back. Shawn’s parents consulted an ear, nose and throat doctor in New Jersey about their concerns. The ENT referred the family to Karen B. Zur, MD, director of the Pediatric Voice Program and associate director of the Center for Pediatric Airway Disorder at The Children’s Hospital of Philadelphia.

In July 2011, Dr. Zur examined Shawn and immediately scheduled a bronchoscopy, a magnified, diagnostic exam of the inside of Shawn’s airway and lungs, and surgery to address whatever blockage would be discovered.

“We’ll never forget the moment in CHOP’s waiting room when — five minutes after surgery — the OR nurse came out to tell us what was causing Shawn’s eating and breathing problems,” Danielle says. It was a subglottic cyst, a frequent complication in premature babies who need a breathing tube for an extended period of time. The cyst was blocking 90 percent of Shawn’s airway, and Dr. Zur was removing it.

Though worried about their baby in surgery, the Friedmans were overwhelmingly relieved that Dr. Zur had identified the problem and was fixing it. 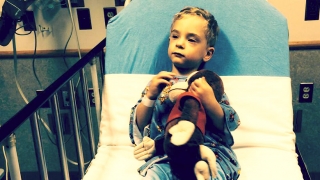 After a successful surgery, Dr. Zur met with the Friedmans to alert them about another complication from Shawn’s preemie days she had discovered while removing the cyst. Shawn had an injured nerve on his voice box.

The injured nerve led to a condition known as unilateral vocal cord paralysis. Essentially, one of Shawn’s vocal cords failed to move properly and was causing his breathy, raspy voice.

“We were stunned to hear this news,” Danielle says. “We didn’t think a medical problem was behind Shawn’s soft voice.”

As the family processed this news, Dr. Zur told them about an innovative surgery at CHOP to fix Shawn’s vocal cord. The surgery, known as recurrent laryngeal nerve reinnervation, would require a surgeon to take a healthy nerve that was supplying a muscle in Shawn’s neck and attach it to the injured nerve that led to his voice box. The new connection would restore his voice, but surgery couldn’t be attempted until Shawn’s airway had healed, he was older, and there was no evidence of the cyst growing back.

The Friedmans were glad to know a treatment option existed, but had some hesitations. They’d grown used to Shawn’s voice as a special part of him and worried a scar on his neck would make him feel self-conscious. Dr. Zur reassured them the inch-long scar would be barely noticeable once it had faded. And she raised issues the couple hadn’t fully considered if Shawn’s soft voice remained throughout his life.

“She pointed out that even teachers may not pay as much attention to or try to elicit a response from a student with a weaker voice,” Danielle says. “She counseled us in ways that didn’t put Shawn’s problem in gross anatomy terms. She was concerned about his well-being and his future.”

The Friedmans decided to wait before making a decision.

As Shawn grew and his airway healed, he struggled to make himself heard. He was very social toddler, but adults often had trouble hearing him. The Friedmans began to imagine how Shawn’s voice could affect his life as he got older and started making friends, going to school, and playing sports.

The family decided to go forward with surgery. The procedure was done in June 2014, when Shawn was 3 years old.

The surgery itself took less than two hours, and Shawn was back in action within a couple of days. His voice was hoarse for the first week, Danielle says, “then it smoothed out and picked up in volume until he had a full, clear voice — his voice.”

“Dr. Zur gave Shawn his voice back at exactly the right point in his life — before kindergarten and before he might have developed a complex from having a weak voice,” Jordan says.

Today, Shawn is a happy 5-year-old who shouts karate commands, sings at Passover Seder, and is quick to speak up in class.

“When I can be loud, it makes me feel good,” says Shawn. “I can cheer on my baseball team. I can tell my soccer team, ‘I got the ball.’ That’s important when you’re a goalie.”