“It was the voice of an angel on the other end of the line,” says Lynne Lehrkinder, mother of now 19-year-old Patrick. She was recalling the frightening day in 2012 when she first called Children’s Hospital of Philadelphia. The family had just learned that Patrick had a condition called tracheal stenosis in which the trachea, or windpipe, can narrow to the point of suffocation. In Patrick’s case, his throat was nearly closed. 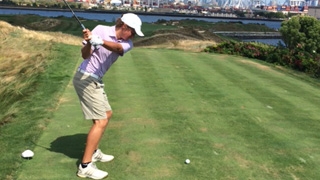 Lynne described the severity of his condition to nurse practitioner Joanne Stow, who was on the phone. “She assured me they could take care of Patrick. She told me we called the right place.” Up until his diagnosis, Patrick had no concerns about his breathing. He played travel baseball and basketball and ran track and cross-country. He had become a near-scratch golfer, playing since he was 6. He wasn’t especially tired through sports or school, and he never complained. “I didn’t know any differently. This was normal breathing to me,” says Patrick.

But during basketball try-outs freshman year, he was red-faced and more tired than usual. He did not make the team and the coach hinted because it was because he looked like he was laboring. Patrick had been to numerous doctors who diagnosed him with everything from vocal cord dysfunction to an allergy to Doritos. Not making the basketball team pushed his parents to keep searching for an answer.

The family took him to a nearby pulmonologist who finally ordered a bronchoscopy. “That’s when we found out his airway was about the size of a Q-tip,” says Lynne.

Getting help at CHOP

Immediate surgery was necessary. “I went home, did a little more research, and then called CHOP,” says Lynne. They had an appointment with Ian N. Jacobs, MD, the next day.

Dr. Jacobs sat the family down and explained in simple terms the tracheal resection that would correct Patrick’s condition. He would remove the constricted portion of the trachea and then reattach the upper and lower parts. “He was straightforward about the long recovery involved,” says Patrick’s father, Tom. Patrick would recover in the hospital for a month and then at home for another month. A top goal was to avoid the respiratory infections that could make his throat swell.

The family recalls how Dr. Jacobs was quick to point out that, given his severe blockage, Patrick functioned like a superhuman. “The staff said to Patrick that after surgery he’d be like the Bionic Man,” says Lynne. 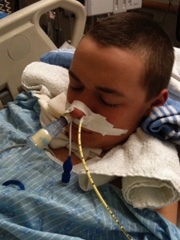 Surgery was done March 1, 2012, and then the hard work began. Patrick had breathing tubes for 72 hours, so he couldn’t talk. His chin was stitched to his chest for about two weeks, preventing the trachea — and him — from budging. The pain was enormous. “I just had to wait it out,” he says.

Patrick clearly remembers the whole staff rallying around him night and day — from the nurses and doctors to the occupational and physical therapists.

The real breakthrough for Patrick’s was taking his first normal breath. “When his breathing tubes came out, his eyes popped open. He couldn’t believe what it felt like to breathe the way everyone else breathes,” says Lynne.

Patrick bounced back quickly — no doubt his athleticism played a part. Dr. Jacobs said, “You’re good to go” after only two weeks. 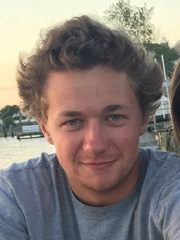 By the middle of April, he was cleared for school, gym, and athletics. His golf coach had a spot on the team waiting for him. Although he had missed half the season and his neck felt stiff, Patrick still shot a 4 over par 40 over 9 holes on his first match back.

Patrick enjoyed his heightened new life. Small differences felt big to him: Carrying his bag around the course with ease; riding his bike with his sister and brother, and gulping air as he rode up a hill.

Now he has a Division 1 golf scholarship to Monmouth University, where he just started his sophomore year as a finance major.

When he goes back to Children’s Hospital, “they treat him like a rock star,” says Lynne. “They say, ‘Paddy’s back, Paddy’s back!” “They joke around and say things like, is the Bionic Man running any marathons?”

For his part, Patrick feels as though he has already won the race. He is now savoring “what it feels like to do everything better when you can breathe,” says Patrick. “Dr. Jacobs saved my life, and now I get to live a better life — a normal life.”