Picture a singer with laryngitis and you might think his cure is just a few cancelled gigs away. But for talented Jackson McGovern losing his voice was a long-term ordeal, resolved only after a CHOP expert intervened with “key” culinary advice to complement his medical care. 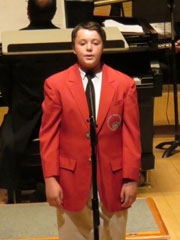 Twelve-year-old Jackson loves to sing a capella and perform for a crowd. Like his hero Bruno Mars, he was born for the stage. For the past few summers he has performed in a local theater, rehearsing up to two hours a day. In 2014, when Jackson was 10 years old, he joined the Philadelphia Boys Choir. He sings at the Kimmel Center and has traveled to China for a concert. “His voice is his everything,” says his mother, Courtney.

But in September 2014, after a rigorous theater schedule, Jackson awoke to find he’d lost his voice. He was treated locally for laryngitis. But when Jackson’s voice returned, he still couldn’t hit his high notes.

In May 2015, Courtney turned to CHOP. She scheduled an appointment at The Children’s Hospital of Philadelphia’s Specialty Care Center in Exton with pediatric surgeon Steven Sobol, MD, MSc. With a tiny scope specially designed for children, Dr. Sobol probed Jackson’s nasal cavity and throat. He made a surprising diagnosis: reflux was causing Jackson’s laryngitis. Stomach acid had been reaching, and damaging, his vocal cords. Dr. Sobol gave Jackson a 6-month prescription for medicine that would manage his reflux. He also recommended a consult with his colleague, Karen B. Zur, MD, at the Main Hospital. As director of CHOP’s Pediatric Voice Program, Dr. Zur has a reputation for helping young singers get back on stage.

Once Dr. Zur took over Jackson’s care, she added one more note to the medley: change your diet. It turned out Jackson’s was eating lots of highly acidic foods like pizza and orange juice. Tomato sauce and OJ were now off the list. Also, spicy foods like buffalo chicken and fried foods he loved: gone. “I now have to drink apple juice and eat white pizza,” he sighs. “It was really hard at first. But the changes made me better.”

During the summer of 2015 when Jackson was on this combined treatment approach, he toured China with the Philadelphia Boys Choir. He nailed his performance of “I Can Show you the World” from Aladdin.

Throughout his recovery, Dr. Zur’s team made the larger life adjustments easier, Courtney says. “Each of the nurses was so helpful and friendly. Jackson even had a voice nurse who would check his range. The whole team supported him. That made a difference in his level of commitment.”

Jackson finished his course of medication in November 2015 and his vocal cords remain healthy by just sticking with the dietary changes. “His voice and range sound great,” says Courtney.

White pizza may not be perfect, but Jackson’s pitch is.