Fighting an aggressive brain tumor is a team effort 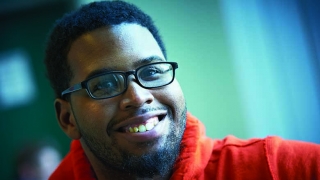 You may have read the book or seen the movie with Sandra Bullock called The Blind Side. A gentle giant overcomes all obstacles to become a starting NFL player who protects quarterbacks for a living.

That was going to be Brandon Terrance: Beat the odds to make it into the pros. A 6´4˝, 300-pound left guard. A mover of men. A rock.

He was well on his way, too, winning a championship at Philadelphia’s West Catholic Preparatory High School in 2009 and earning the starting nod at Indiana University of Pennsylvania.

Then the headaches started. Fierce, burning, vivid pain. His vision blurred and insides turned with nausea. He was 21.

Brandon’s doctor ordered a CT scan, then sent him to the emergency room. It was October 2011. By the new year his world had turned upside down.

There’s no two ways about it: Brandon is big. Muscles on muscles, he could bench-press 400 pounds. Yet he’s laid-back, quiet and understated, and the most responsible one in the room. If you were playing a sport where the other team wanted to hit you, Brandon is the guy you’d want in front of you.

But now there was a tumor on his brain that they said was inoperable. His doctors didn’t know what type of tumor it was, so they didn’t know how to fight it. Removing a piece would be tricky.

At a conference, his doctor had met a wunderkind pediatric neurosurgeon named Phillip “Jay” Storm, MD, who specialized in tough brain tumors. Storm happened to work nearby at CHOP. Brandon’s doctor asked if Storm would come and help him get a sample of the tumor, and he did.

The diagnosis came back on his mom’s birthday: glioblastoma multiforme. “A death sentence,” they said.

Brandon’s mother, Tina Walters, is half his size and larger than life. She talks in stories and will leave you in stitches. And she loves her son fiercely. Walters would not accept that there was nothing to be done. She pressed for action, for options. Brandon’s doctor offered a long shot.

“He said, look, Brandon’s bigger than most adults, but he’s basically a big kid,” Walters says. “Take him to The Children's Hospital of Philadelphia (CHOP). That’s when he put me in touch with Jean Belasco and everything changed.”

Belasco, an oncologist at CHOP, looked at Brandon's charts. She thought they could fight it.

But the tumor had grown; it had long, sticky fingers wrapped around Brandon’s brain stem. They would have to take it out. And Belasco knew just who could do it.

“Most of the doctors we’d seen before CHOP spoke to us about what could go wrong,” says Walters. “They’d say, ‘This will be a rough road.’ That wasn’t what Dr. Storm said when he came in that room. The confidence he had. He said I’m going to go in this way, and I’m going to get it out.”

Storm did. That big, ugly spider of a tumor was cut down to a speck no bigger than the tip of a fingernail.

Storm and Belasco weren’t the only heroes in Brandon’s story.

When Brandon sees Laura Palmer, he crumples his large hand into a fist, and in return Palmer gently knocks her own petite knuckles against his.

“He’s teaching me how to be hip,” Palmer says with a laugh, explaining the fist bump.

During Brandon’s year at CHOP, Palmer, one of CHOP’s chaplains, was a constant, holding hands and praying with his family.

“Laura is in our pack of lifesavers,” says Walters. “Dr. Belasco and Dr. Storm helped heal Brandon’s body, and Laura has been there for us to help heal his soul.”

“Brandon is one of the reasons I do what I do, why I love what I do,” says Palmer. “Being in oncology can be terrifying. But I wouldn’t be here if I didn’t believe love is stronger than cancer.”

This past January, Brandon and his family got news that the tumor was growing again. But he is fighting and has his faith.

Despite his ordeal, or because of it, Brandon still wants to be a professional protector shielding others from the hard hits in life, only not as a football player but through service in the church.

“I was going to be in the NFL,” says Brandon softly. “I was going to make it happen. But now I look at life differently. I see so much more than I did playing football. I want to help others fight now. That is my dream.”