Conditions affecting cardiac structure, heart function or blood flow in the developing human fetus can be accurately diagnosed allowing for proper family counseling and management of disease prior to birth. Conventional obstetrical imaging of the heart through the techniques of fetal echocardiography is typically performed at 18–22 weeks’ gestation. The timing of fetal echocardiography is dictated by the fact that it usually follows the suspicion of an anomaly that may be seen on the standard 20-week-gestation anatomical ultrasound scan, performed in most pregnancies in the United States today.

Currently, the approach to the timing of fetal echocardiography is undergoing a dramatic change, with a shift toward earlier imaging. There are two reasons for this. First, the capacity to accurately image the fetal heart has improved substantially in the last decade. Advances in ultrasound technology allow for visualization of tiny cardiac structures only millimeters in diameter, as well as Doppler interrogation of blood flow patterns as early as 12 weeks’ gestation. Second, risk stratification for birth defects now starts as early as the first trimester of pregnancy. Tests such as nuchal translucency screening or maternal blood screening for fetal DNA provide families with information concerning the possibility of a chromosomal or genetic anomaly or the risk of the presence of congenital heart disease within the first few weeks of pregnancy. Referring healthcare providers and families are interested in having as much accurate information as early as possible concerning the presence of a fetal heart defect.

Benefits of early detection and diagnosis

At the Fetal Heart Program at CHOP, we have focused attention on the need for early imaging and have developed an “early gestational fetal cardiovascular imaging” (EFCI) program. Our trained sonographers are comfortable performing the early gestation imaging and our fetal cardiologists are experienced in interpreting the details of the cardiovascular system from 12 weeks’ gestation onward.

A woman is a candidate for EFCI when: 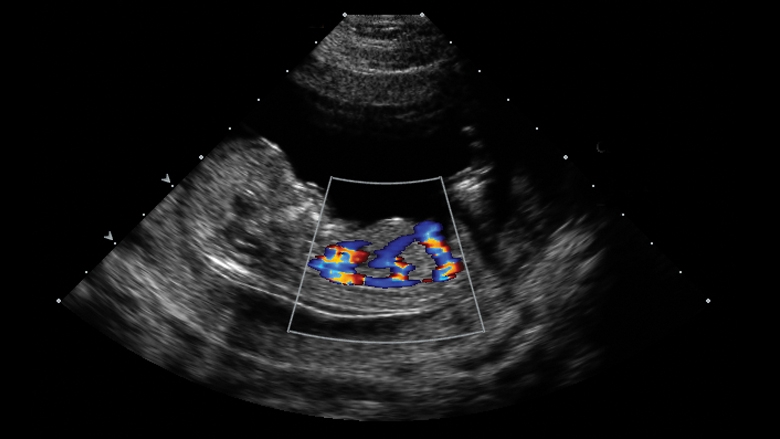 Most imaging can be done from the standard trans-abdominal approach, with less than 5 percent requiring additional trans-vaginal imaging to complete the picture. As early imaging is pushing the boundaries of technology, repeat confirmatory fetal echocardiography at 18–20 weeks’ gestation is still recommended. Hundreds of women over the past five years have had early gestational fetal cardiovascular imaging at CHOP and have received accurate information about their fetuses’ health. Whether it be the good news of a normal heart and the relief of knowing all is well, or the discovery of an anomaly, which allows for the start of counseling and care, early gestational fetal cardiovascular imaging has tremendous benefits.

Only a few specialized centers around the country have the proper equipment, operator skill and experience performing early gestational fetal cardiovascular imaging. Detection of defects at the earliest point in time allows for the earliest capacity for counseling, management and intervention. Early gestational fetal cardiovascular imaging also alleviates the stress of having to wait from the time of risk identification of, for example, an increased nuchal translucency at 12–13 weeks until a conventional fetal echocardiogram at 18–20 weeks. Fetal echocardiography can be done immediately, as soon as indicated. Knowledge is key — and families demand accurate information concerning their unborn child as early as possible. The Fetal Heart Program at CHOP is pleased to be one of the centers pioneering the effort for early gestational fetal cardiovascular imaging, and the only center in the region offering this unique service to patients.