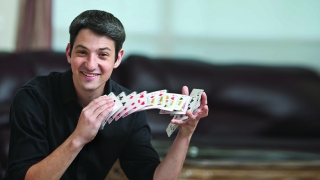 Among the children seated in the Colket Atrium, all eyes were on magician Chad Juros as he juggled three balls in the air, not missing a beat. Then the 25-year-old moved on to one of his favorite tricks: making a boom box disappear. Chad asked some volunteers to verify the box was under the cloth and then — voilà — it vanished into thin air.

It was not lost on Chad that this was the same building he had called home for 17 months as a child when CHOP’s Cancer Center treated him for a leukemia relapse. Grateful for the care he received there, the Egg Harbor Township, NJ, resident now uses his talents to give back to CHOP. His personal story and his message of hope is something he shares during every magic show.

That story began at age 3, when Chad was first diagnosed with leukemia. Four years later, he relapsed. To distract his son from pain and fear, Dr. Donald Juros performed magic tricks at Chad’s bedside and passed the time with videos about magic.

“We did card and coin tricks,” recalls Chad. “It had to be things I could maneuver with my hands in bed.” Chad practiced the craft for hours while receiving his cancer treatments.

In 1998, a few months after Chad went into remission, Dr. Juros was diagnosed with a malignant brain tumor. Chad performed magic at his father’s bedside. “Every once in a while I got a little smile on his face, and that was worth everything right there,” says Chad. Sadly, Donald passed away at age 41, but his dying wish was for Chad to “spread the magic.”

To honor him, Chad, along with his mother and sister, founded the Spread the Magic Foundation. It provides magical entertainment to children with cancer, and proceeds benefit cancer research at CHOP.

Today, the Richard Stockton College of New Jersey graduate performs his magic all over the world, some events for charity, others for profit. Performing at the hospital last spring was bittersweet for Chad.

“I was looking in these kids’ eyes and I saw myself,” he says. “I was in their place not too long ago. These children were still so happy in spite of their pain.”