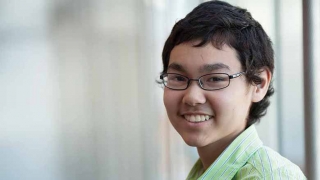 Nick Wilkins, 15, has been on a roller-coaster ride — literally and metaphorically.

Nick, who has battled leukemia for most of his life and is part of a clinical trial at CHOP, calls himself “kind of an adrenaline junkie.” He was just weeks into his treatment last summer when he asked his CHOP oncologist, Stephan Grupp, MD, PhD, “Can I go to an amusement park and go on a roller-coaster that goes 128 miles an hour?”

“Dr. Grupp’s face was priceless when Nick asked that,” recalls Nick’s mother, Lisa Wilkins. And once Dr. Grupp recovered from his surprise, the answer was yes. There was no medical reason not to go.

Thanks to the efforts of Grupp and his CHOP colleague Susan Rheingold, MD, Nick is finishing up 10th grade in his hometown of Ashburn, VA, and practicing baseball every day, since he’s planning to join the high school team this fall.

“Science is my favorite subject,” he says on a Thursday afternoon, when he’s preparing to study for final exams and hoping to lure his little sister Ashley outside for a quick batting practice before dinner.

Diagnosed with leukemia at age 4

With his dark hair, engaging smile and cool glasses, Nick fits right in with other style-savvy, sports-loving teens, but his journey to 10th grade has proven that Nick and his family are made of stronger stuff than most: Nick was 4 when routine blood tests on a well visit to his pediatrician showed that he had leukemia. The pediatrician reran the tests for three days, puzzled because Nick was so energetic and lively.

“A lot of kids would have been sick, run down, pale,” recalls Lisa Wilkins. “But he didn’t show any signs of that. The pediatrician called to ask, ‘Is he moving?’ I told him Nick was outside playing with his sister, having fun. Most kids would have been flat on their back.”

Unfortunately, the tests proved that Nick’s leukemia diagnosis was correct, and he began his treatment odyssey with 2½ years of chemotherapy. Just three months shy of reaching his 5-year anniversary of being cancer-free, Nick relapsed.

Nick’s next course of treatment was to have a bone marrow transplant. Tests showed his two sisters were both perfect matches, and his older sister Brittany became his donor in January 2010.

But three years later, doctors at Duke University told Lisa and her husband, John, that Nick had relapsed again.

After one month of chemotherapy to prepare for another bone marrow transplant, Nick’s cancer cells were now resistant to chemotherapy. They were out of options to save his life — until their doctor informed them about immunotherapy trials being conducted at CHOP, under the direction of Grupp.

The CHOP trial, conducted in collaboration with the University of Pennsylvania, has treated 30 patients and has achieved an extraordinary 90 percent complete remission rate.

These results have led to a Phase II trial, supported by the drug company Novartis, intended to see if the treatment will work in a larger group of patients, including those at other hospitals. This trial is being facilitated by a grant from Stand Up to Cancer (SU2C) and led by John Maris, MD, at CHOP. SU2C has supported the formation of an immunotherapy consortium of elite pediatric hospitals across North America.

Lisa Wilkins did thorough research before Nick’s initial appointment at CHOP in April 2013.

“There wasn’t a lot of information out there on the T-cell study, but when I met Dr. Grupp, I knew this was what we needed to do,” she says calmly. Just four days after meeting with Grupp, some of Nick’s T cells were removed. Then the cells were genetically modified to attack his cancer cells before being reintroduced to Nick’s body.

“We went home and waited about six weeks to see if the cells were growing,” Lisa recalls. “And then we got the call that they had.”

After a round of chemotherapy, Nick had a second infusion with his reprogrammed cells. One month later, he was cancer-free.

Each month since, he has traveled three hours to CHOP for a checkup, and the results have been dramatically positive. He has had no cancer treatment since.

Nick’s future is bright, including this summer’s trip to Kings Dominion in Virginia for another roller-coaster ride. And he and his family credit CHOP’s efforts for turning around his young life.

“It’s really cool to be a part of something that could be the cure for cancer,” says Nick.

Breakthrough stories like Nick's are made possible, in part, thanks to generous donations to the Cancer Center. With your support, we can provide innovative care, pioneering treatments and lifesaving cures to more children — today, tomorrow and for years to come.