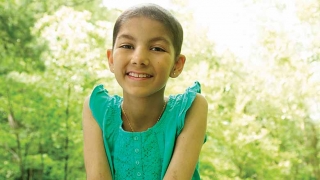 Gracie West is an incredibly strong young lady. How strong? Her nickname is Cookie, says her mom, Sharon, as in “one tough cookie.” She’s also a very popular Cookie: The Freehold, NJ, fifth-grader has 71,000-plus followers on Instagram, where you can find her under the username cookiescrumblers.

Before her diagnosis of neuroblastoma, a rare cancer of the nerve cells, last November, Gracie showed off her uncommon grit on the soccer field and in the swimming pool. Sharon says that in the past six months, she has shown a new level of toughness that surprises even her doctors.

“She was being treated with a notoriously hard chemo drug, and the doctors braced us that it would be rough. But instead of complaining, she was showing the doctors magic tricks and trying to keep our spirits up,” says Sharon. Gracie has also taken to giving impromptu ukulele concerts, an instrument she first discovered in CHOP’s Music Therapy program.

Her charming personality has drawn many supporters to her cause — even some celebrities. After meeting YouTube sensation Bethany Mota at an event in New York City, the two connected online and Mota has helped attract attention to Gracie and, more important, her foundation, Cookie’s Crumblers. Right now the foundation is raising money to help pay for Gracie’s treatments, but in the future it will help other children battling cancer as well.

“Gracie wants to pay it forward — helping others is so important to her,” says Sharon. Since its inception five months ago, Cookie’s Crumblers has raised more than $45,000.

As the race approaches, Gracie plans to bring that fundraising prowess to her role as ambassador. Both Gracie and her mother are thrilled that 100 percent of the funds raised through the Four Seasons Parkway Run & Walk will directly benefit Gracie and other children like her. Last year’s event raised an impressive $1 million and drew more than 10,000 attendees.

If Gracie has anything to do with it, this year’s numbers will smash all previous records. With her following, it’s possible. If she is well enough, Gracie will participate in this year’s walk, no doubt cheering everyone along as she goes.

But Gracie’s ability to inspire goes way beyond race day. She has gotten good at lifting both the mood of everyone around her and her own spirits. “If I ever start to feel bad,” she says, “I look at myself in the mirror and say, ‘I’m strong. I’m brave. I’m a tough cookie.’”

Breakthrough stories like Gracie's are made possible, in part, thanks to generous donations to the Cancer Center. With your support, we can provide innovative care, pioneering treatments and lifesaving cures to more children.