Ninety percent of children and adults with acute lymphoblastic leukemia (ALL) who had relapsed multiple times or failed to respond to standard therapies went into remission after receiving an investigational personalized cellular therapy, CTL019, developed at the Perelman School of Medicine at the University of Pennsylvania. Results were published in October in the New England Journal of Medicine.

The data, which builds on preliminary findings presented at the American Society of Hematology’s annual meeting in December 2013, include results from the first 25 children and young adults (ages 5 to 22) treated at CHOP and first five adults (ages 26 to 60) treated at the Hospital of the University of Pennsylvania. Twenty-seven of the 30 patients in the studies achieved a complete remission after receiving an infusion of the engineered cells, and 78% of the patients were alive 6 months after treatment.

“The durable responses we have observed with CTL019 therapy are unprecedented,” said the study’s senior author, Stephan Grupp, MD, PhD, director of Translational Research in the Center for Childhood Cancer Research at CHOP and professor of Pediatrics in Penn’s Perelman School of Medicine. “The patients who participated in these trials had relapsed as many as four times, including 60% whose cancers came back even after stem cell transplants. Their cancers were so aggressive they had no treatment options left.”

CTL019 manufacturing begins with a patient’s own T cells, collected via apheresis, then reprogrammed in Penn’s Clinical Cell and Vaccine Production Facility with a gene transfer technique that teaches the T cells to target and kill tumor cells. The engineered cells contain an antibody-like protein known as a chimeric antigen receptor (CAR), which is designed to bind to a protein called CD19 found on the surface of B cells. The modified “hunter” cells are then infused back into the patient’s body, where they both multiply and attack the cancer cells (Fig. 1). A signaling domain built into the CAR promotes rapid multiplication of the “hunter” cells, building an army of tumor- killing cells that tests reveal can grow to more than 10,000 new cells for each engineered cell received. 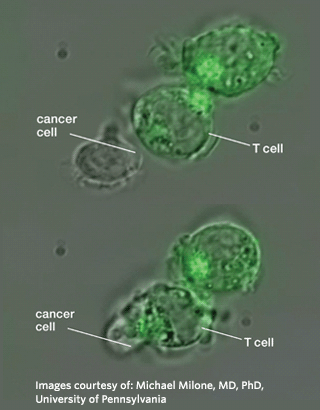 Nineteen patients in the study remain in remission, 15 with this therapy alone, including a 9 year old who was the first ALL patient to receive the therapy more than 2 years ago. The follow-up reported in the study are more than 6 months for most patients, with a range from 1.4 to 24 months. Five patients went off-study for alternate therapy, 3 of whom proceeded to allogeneic stem cell transplants while in remission. Seven patients relapsed, between 6 weeks and 8.5 months after infusion, including 3 whose cancers returned as CD19-negative leukemia that would not have been targeted by the modified cells.

All patients who received the CTL019 cells experienced cytokine release syndrome (CRS) within a few days after infusion — a key indicator that the engineered cells have begun proliferating and killing tumor cells. During this time, 22 of 30 patients experienced mild to moderate CRS, which included varying degrees of flu-like symptoms, with high fevers, nausea, and muscle pain. Eight patients developed severe CRS, which required treatment for low blood pressure and breathing difficulties. Nine patients were treated with tocilizumab to block the effects of the inflammatory cytokine IL-6, which have been found to spike during the most robust phase of the engineered cells’ expansion. Six patients received short courses of steroids. All fully recovered from the CRS.

Tests of all patients who experienced complete remissions showed that their normal, non-cancerous B cells had been eliminated along with their tumors. The researchers note that persistent absence of normal B cells following CTL019 treatment indicates continued activity of the gene- modified T cells, which are thought to provide long-term activity preventing tumor recurrence. Since B cells play a role in helping fight infection, patients typically receive immunoglobulin replacement to maintain healthy immune function.

In July 2014, the U.S. Food and Drug Administration granted CTL019 Breakthrough Therapy designation for the treatment of relapsed and refractory adult and pediatric ALL, the first personalized cellular therapy to receive the designation. The first multicenter CTL019 trial has opened in the United States, and additional multisite trials are expected to initiate by end of year.

The study was supported by the National Institutes of Health (1R01CA165206, R01CA102646 and R01CA116660), the Leukemia and Lymphoma Society, and a Stand Up To Cancer-St. Baldrick’s Pediatric Dream Team Translational Research Grant.