No two families will have the exact same experience of caring for a child with neurofibromatosis type 1. This complex genetic condition can cause cancerous and non-cancerous tumors to grow in the brain, spinal cord, nerves and other areas of the nervous system. Even in families, two children with the disease may have very different symptoms.

Still, there are often common threads that run through each family’s story. Even more often, parents and guardians of children with NF1 are amazing sources of hope and reassurance.

Here, Kelley Schmidt and Kristin Camiolo, who both have daughters followed by the Neurofibromatosis Program at The Children’s Hospital of Philadelphia, share their stories in hopes of helping other families who are facing an NF1 diagnosis. 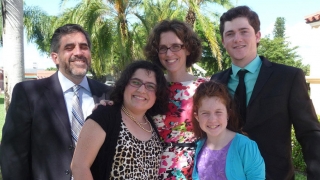 The Camiolo family: Rose (Rosie), 13, and Genna, 17, both have neurofibromatosis type 1. While Rose has benign tumors that have not yet required treatment, Genna has been through several rounds of chemotherapy for brain tumors. Kristin’s husband, David, also has NF1, though his only symptoms have been bumps on his skin. The couple also has a 20-year-old son, Andrew, who does not have neurofibromatosis.

Several times each year, the family travels 82 miles from their home in northern New Jersey for the girls’ appointments and regular MRI exams at CHOP. 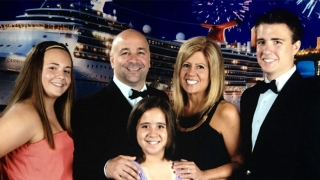 The Schmidt family: Carly is 10 years old and was diagnosed with NF1 when she was 10 months old. She began chemotherapy to treat several brain tumors when she was 2 1/2 years old, and for the last five years hasn’t needed further treatment.

Neurofibromatosis does not run in her family: Carly has two older siblings, Brandon, 15, and Holly, 13, who do not have the disease, and neither does her mother, or her father, Adam.

Q: How did you find out your children had neurofibromatosis type 1?

Kristin: My husband has NF, so we knew what we were looking for. Genna had very apparent café au lait spots and was diagnosed when she was 6 months old. She didn’t have any issues until she turned 6, though. That’s when she had a problematic eye exam and was sent for an MRI, which found her optic pathway glioma [a brain tumor of the visual system].

We didn’t find out Rose had NF1 until she was about 2 years old, around the same time they found Genna’s brain tumor. Rose has lighter skin than Genna, so her café au lait spots weren’t visible.

Kelley: When Carly was 10 months old, I took her to a plastic surgeon in New York City to have a large mole on her left arm removed. It covered her whole upper arm and had dark hair on it. We asked the doctor what he thought about the lighter birthmarks that were all over her body. Our pediatrician had said not to worry about them, but we were curious.

The plastic surgeon took one look and said we needed to see a geneticist right away. He even called CHOP and got her an appointment.

We first saw Dr. [Elaine] Zackai, who confirmed Carly had NF1 after genetic testing. Because no one else in our family has the disease, it’s considered a spontaneous mutation.

Q: What has your experience with CHOP’s Neurofibromatosis Program been like?

Kristin: We knew right away that CHOP was the right place for our family. We were so happy to see “Neurofibromatosis” written right on a sign near where you check in for the Neurofibromatosis Program. And for all the years we’ve been coming to CHOP, we’ve only had to spell out the disease name for someone once.

And I appreciate how involved CHOP is in researching treatments for neurofibromatosis. Any time there’s a study at CHOP, I sign us up. Even if the research doesn’t help my girls, it will help others with the disease in the future.

Kelley: We would never take Carly anywhere other than CHOP. Everything is very centralized there; every doctor can see all of her records and know the specifics about her condition and the treatment she’s had. It’s cohesive, excellent care.

We were also glad we could go to the King of Prussia Specialty Care Center for Carly’s chemotherapy. We started out at the Main Hospital in Philadelphia, but we live in the suburbs and it wasn’t as convenient for us. When we said we wanted to change locations, everyone was very supportive and just wanted to help us do what was best for Carly and our family.

Q: What has been the most challenging part of caring for children with NF1? And what is the most rewarding?

Kristin: The unpredictability of the disease is tough, and the fact that in some cases it’s progressive. And there’s so much variability, even within one family. Such varied things can happen to each person with the disease.

But I’ve learned that Rosie and Genna are ridiculously mighty kids. Every parent thinks their kids are awesome, but to see how my girls handle things, all of the physical and emotional challenges, years of chemotherapy, rounds of tests — the road has been tough but they’ve both handled it so well. They’ve been through a lot and can still find hope and happiness. Seeing what they’re capable of really inspires me and our whole family to do things we didn’t think we could do.

Kelley: Carly was so young when she went through chemo. In the beginning, her condition didn’t faze her. In first grade, though, she had to bring in pictures of herself when she was younger, and in most she didn’t have hair or looked sick. I think she started to feel embarrassed.

After speaking with her doctors, we realized she was experiencing signs of post-traumatic stress disorder. So we started to talk about what she’d been through and her condition more often, and to put pictures of those days around the house. I think that’s made it a lot easier for her to talk about the disease and hear about it, too.