Angel, 13, was diagnosed with cancer in 2014, and five years later he was devastated to learn that it had come back, worse than before. The treatment he underwent for the relapsed cancer was much tougher than for his first bout. Practices offered by Children's Hospital of Philadelphia’s (CHOP) Integrative Oncology Program — in particular, yoga — helped Angel cope with his treatment journey. And when he needed a major procedure during COVID-19, virtual yoga sessions made a big difference in keeping his calm. 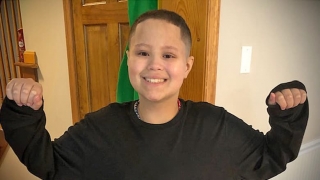 In August 2014, Angel suddenly had a persistent fever, increased heart rate and leg pain so bad he couldn’t stand up. The family headed to their local ER in New Jersey. Doctors there said Angel needed to be transported to CHOP, which alarmed his mother, Edelys. “I googled ‘low white blood count’ and the first thing that came up was leukemia,” she recalls. “I work in the medical field, but you can’t know what something’s really like until you go through it yourself.”

At CHOP, Angel was diagnosed with acute lymphoblastic leukemia. The only treatment he needed was chemotherapy, and after the end of the three-year regimen, Angel spent nearly two years cancer-free.

‘Go through it again’

In October 2019, the day before one of his regularly scheduled follow-up appointments at CHOP, Angel began complaining of a pain in his side — and indeed, tests showed the leukemia was back and was more widespread. “Unfortunately, I had to tell my son he’d have to go through it again,” says Edelys. This time, though, he needed a much more aggressive treatment plan: chemotherapy, immunotherapy, radiation and a stem cell transplant.

At this point his care team asked if he wanted to take part in any of the Integrative Oncology Program’s offerings. “Integrative health” refers to therapies and practices that combine conventional and complementary approaches to address the medical, psychological, social and spiritual aspects of health and illness. Acupuncture, massage and yoga are examples of integrative health.

When integrative therapist Tonia Kulp, MS, C-IAYT, visited Angel to talk about the benefits of yoga, his first reaction was “What is this? I don’t want to do it.” But then he learned more. Yoga as offered through Integrative Oncology doesn’t have a structure like one thinks of for an adult class. A mat may be used but it’s not required, and there’s no routine of regimented poses. “He thought of yoga like exercise,” says Edelys. “But he found out it’s about meditating and breathwork, and it could relax his thoughts. He got really into it. I was surprised and happy.” He also received massage therapy, which is available through the outpatient Oncology Clinic at CHOP’s Specialty Care & Surgery Center in Voorhees, N.J.

Helping to focus on something else

Angel established a bond with Kulp that became particularly meaningful in the spring. He was admitted to CHOP for his stem cell transplant on March 15, just after the coronavirus pandemic sharply limited who could be in the hospital. Angel’s sessions with Kulp took place virtually, and she was especially vital during some rough patches. For example, after the transplant, he experienced a full-body rash as a reaction to the new cells, and later he was extremely nervous about having an NG tube inserted to supply nutrition. At times like these, “Hearing her voice helped a lot,” says Edelys of Kulp. “She would say ‘think of this,’ and he’d go into that mode.”

“Angel was very self-motivated,” explains Kulp, “which allowed working with him to have bigger benefits. He did the work on his own as well, several times tuning in to meditations at night. He’d use tools like mudra — hand gestures that facilitate the flow of energy — and breathwork when he was at home or during outpatient care.”

Edelys thinks the Integrative Oncology Program is “really beneficial. It helps them focus on something else and learn how to use their bodies in different way, especially if they’re bed-bound.” What Angel has experienced so far has made him curious about the program’s other offerings. “Now he’s interested in acupuncture — he really wants to try it!”