At the Center for Fetal Research, the research extension of CHOP’s Center for Fetal Diagnosis and Treatment, an area of great interest involves genetic manipulation of lung development via viral-vector gene therapy. We recently developed an efficient method for gene transfer to fetal lung interstitial cells during the pseudoglandular stage of lung development by direct ultrasound-guided intrapulmonary injections of viral vector (see images below). Using this technique, we investigated whether focal expression of Fibroblast Growth Factor-10 (FGF10), an epithelial growth factor pertinent to fetal lung growth, would initiate epithelial proliferation.

An adenovirus incorporating green fluorescent protein (GFP; reporter gene) and FGF10 was injected into fetal rat lungs at either 15.5 (pseudoglandular) or 18.5 (canalicular) days of gestation (term~21 days). We found that overexpression of FGF10 restricted to the proximal tracheobronchial tree during the pseudoglandular phase resulted in large cysts lined by tall columnar epithelium comprised primarily of Clara cells with a paucity of Type II pneumocytes, resembling bronchiolar type epithelium.

In contrast, FGF10 overexpression in the distal lung parenchyma during the canalicular phase resulted in small cysts lined by cuboidal epithelial cells comprised of primarily Type II pneumocytes resembling acinar epithelial differentiation. The cystic malformations induced by FGF10 overexpression appear to closely recapitulate the morphology and histology of the spectrum of human CCAM.

The development of this animal model moves us closer to understanding the genetic and molecular mechanisms responsible for the etiology of CCAMs in human fetuses. Additionally, it provides a platform upon which to explore therapeutic interventions which are currently clinically utilized such as maternal steroids or those which are potential therapeutic targets for the future such as gene therapy. With this armamentarium and continued research, we hope to enhance the care we provide to the many families carrying a fetus with this diagnosis. 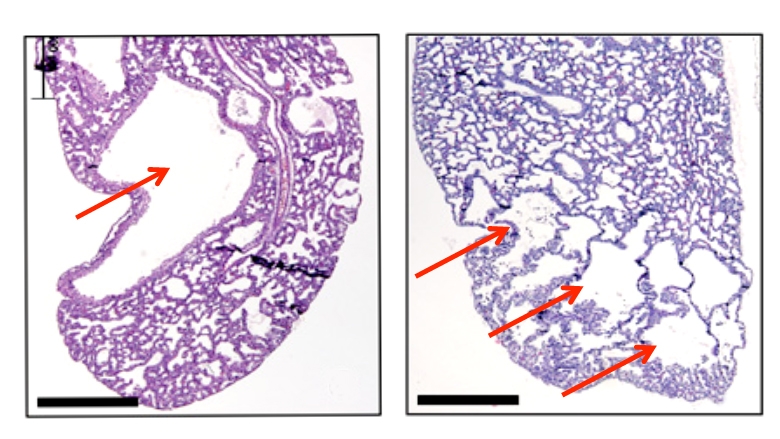