Advocating for Children’s Health Is Core to CHOP’s Mission

Published on Jun 25, 2018 in Breakthrough Report 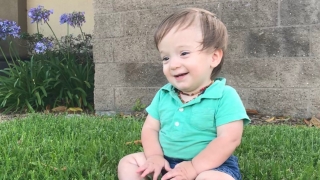 Today, when Amanda and David Kane look at their son, Andrew, they’re extremely grateful that they had quick access to the Center for Fetal Diagnosis and Treatment at Children’s Hospital of Philadelphia (CHOP).

The Kanes were lucky because some military families struggle to get the rapid referral needed to treat birth defects diagnosed in utero. Time is of the essence in these cases; there is often a small window of opportunity to change the course of the child’s life by lessening the severity of an anomaly or even correcting it. Leaders at CHOP recognized this barrier and the risk it posed to military families, so they set out to change the policy.

CHOP spent two years lobbying to include language in the National Defense Authorization Act (NDAA) that requires the Department of Defense (DoD) and TRICARE, the military healthcare program, to ensure that pregnant women are quickly referred to qualified fetal medicine providers upon diagnosis of a birth defect.

The original idea for this requirement came out of a meeting that CHOP President and CEO Madeline Bell had two years ago with Rep. Tom MacArthur, a Congressman from New Jersey. She shared stories when, by the time military families were referred to CHOP’s Center for Fetal Diagnosis and Treatment, it was too late in the pregnancy for effective treatment.

CHOP representatives visited congressional offices, made calls, sent emails and worked with colleagues at other children’s hospitals experiencing the same delays to gather support, and with the leadership of Rep. McArthur, as well as Sens. Mike Rounds, Robert Casey and Cory Booker, eliminated the hurdles. The NDAA, including the language requiring expedited referrals for military families seeking care from the fetal diagnosis and treatment centers throughout the country, was signed into law on Dec. 12, 2017.

CHOP continues to advocate for many state and national legislation and public policy initiatives as it strives to improve and preserve the health of children.

Bell has made a number of trips to Washington since January 2017 on behalf of CHOP and as the chair of the Children’s Hospital Association (CHA) board of trustees. She says the environment on Capitol Hill has changed dramatically.

“Children’s issues aren’t being prioritized as high as they should be,” she says. “Children are our nation’s future. The senators and representatives I meet with have a deep appreciation for our Hospital, and they want to help us advance our mission, but we need to work ever harder for them to keep children top of mind.”

CHOP lobbied relentlessly to ensure that children who receive health insurance through Medicaid were not cast aside in the rush to undo the Affordable Care Act (ACA). In addition to children in low-income families, many children with disabilities and complex medical conditions rely on Medicaid to cover healthcare expenses — even if their families have other insurance.

Through its social media platforms, CHOP shared information with advocates for children who wanted to urge their legislators to make kids a priority, and many responded. Some of the Hospital’s most “shared” Facebook posts focused on maintaining coverage for children.

The multifaceted effort worked. To date, Medicaid remains available to children who need it.

Never a problem before

Since its creation in 1997, the Children’s Health Insurance Program (CHIP) had always enjoyed wide, bipartisan support and routine reauthorization. CHIP provides insurance to children whose families make too much money to receive Medicaid, but not enough to pay for health insurance out of pocket.

When the future of CHIP became uncertain, children across the country began losing access to care as states ran out of money when the deadline for Congress to fund the program passed on Sept. 30. Pennsylvania vowed to foot the bill until federal funding came through. In fact, Gov. Tom Wolf showed his support for CHIP — and Children’s Hospital — by signing the Pennsylvania CHIP reauthorization law during a press conference on CHOP’s Main Campus.

CHOP’s Government Affairs team held 15 meetings with legislators in Washington and Harrisburg, wrote 105 letters and made 76 phone calls to present data supporting CHIP. The Hospital’s Corporate Council, a group of business leaders who support CHOP, signed a letter sent to 33 members of Congress urging them to maintain CHIP, which provides coverage to millions of children throughout America, including some 6,000 CHOP patients.

“Our hard work paid off,” says Senior Vice President of External Affairs Peter Grollman. “All kids deserve access to all necessary healthcare, and CHIP ensures they have it.”

When legislators visit CHOP, see patients and talk with parents and clinicians, it clarifies how important access to quality, affordable healthcare is for families.

In the heat of efforts to repeal the ACA and when CHIP was stalled, CHOP hosted members of Congress for tours of the Hospital’s facilities so they could see firsthand the impact these programs have on the Hospital’s mission — and on children’s health.

The Kanes were one of two CHOP patient families who traveled to Washington to advocate for children’s healthcare over the last year.

Watch this video to learn more about how philanthropic support is providing children and families with the unparalleled care experience they deserve.

Along with Surgeon-in-Chief N. Scott Adzick, MD, MMM, the Kanes met with many legislators. Amanda and David also told the story of their fetal treatment at CHOP at a briefing for congressional and White House staff.

The Kanes learned their second child had spina bifida at an ultrasound when Amanda was 19 weeks pregnant. Dave is an independent duty corpsman in the Navy, a highly trained medical specialist, who was based in Hampton Roads, VA, at the time. Their maternal-fetal specialist knew the CFDT was the national leader in prenatal repair of myelomeningocele (MMC), the most severe form of spina bifida. On Valentine’s Day 2017, they came to CHOP for two days of tests. Doctors recommended Amanda have fetal surgery to repair the MMC, which would give their unborn baby the best outcome.

“We had two weeks to get permission to come to CHOP — from TRICARE and Dave’s commander,” Amanda recalls. Trouble securing both approvals is one reason CHOP has refocused its lobbying attention on this issue to ensure the DoD implements the new rapid access provisions across all levels of all military branches since timely, appropriate care is vital.

Amanda had fetal surgery on March 3, and Andrew was born in the Garbose Family Special Delivery Unit “screaming and healthy” on Memorial Day. He was discharged nine days later. The Navy soon posted the Kanes to Willingboro, NJ, so Andrew could receive follow-up care at Children’s Hospital. He’s had several short inpatient stays in his first seven months, but is developing well, rolling over and scooting around. “He’s doing great,” Amanda says. “We’re very hopeful he will walk with either ankle or leg braces.”

“We believe his future is bright, and the care we received at CHOP is the reason,” Dave says. “So, when we were asked to go to Washington, of course we said ‘yes.’ We’re proud to tell our story.”