Twin pregnancies are associated with an increased perinatal morbidity and mortality compared with singleton pregnancies, with the risk three to 10 times greater in twins that have a single placenta — monochorionic (MC) twins — as compared with two separate placentas — dichorionic (DC) twins. The presence of vascular communications in the shared placenta of MC multiple pregnancies may cause significant hemodynamic alterations between the two fetal circulations, leading to severe complications such as twin-twin transfusion syndrome (TTTS) and twin reversed arterial perfusion (TRAP) sequence.

An accurate diagnosis of an MC gestation is essential and may best be accomplished in the first trimester or early second trimester. An MC gestation appears as a gestational sac containing a thin inter-twin membrane, comprised only of two adjacent layers of amnion which insert into the placenta in a “T” configuration. In some DC pregnancies, the placentas are adjacent and may simulate a single placenta. However, the inter-twin membrane in these DC pregnancies will be thicker since it has four layers — the two layers of amnion plus two layers of chorion — and will have a triangular, “Y” or “lambda” shape at its insertion, also called a “twin peak” sign.

The diagnosis of TTTS is established by identifying abnormal amniotic fluid volumes (AFVs) in both gestational sacs. Polyhydramnios in the recipient’s sac, defined as a deepest vertical pocket (DVP) of fluid of > 8 cm before 20 weeks' gestational age and > 10 cm between 20 and 26 weeks, in conjunction with oligohydramnios in the donor’s sac (DVP of < 2 cm) and oliguria (diminished or absent fluid in the bladder) are the sonographic requisites for the diagnosis of TTTS, unless the pregnancy is a confirmed monoamniotic gestation.

MC pregnancies are also at increased risk for chromosomal anomaly in one or both twins and selective intrauterine growth restriction (SIUGR) of one twin. In those pregnancies, the growth restricted twin may have diminished AF, however the co-twin does not develop polyhydramnios. In fact, a greater than 20 percent estimated weight discrepancy between the co-twins is not a prerequisite for the diagnosis of TTTS.

Sonography also plays a crucial role in assessing the severity of TTTS by spectral Doppler by analysis of the flow parameters in the ductus venosus, umbilical artery and vein, and middle cerebral artery of the co-twins. This Doppler assessment along with a detailed fetal echocardiographic evaluation for cardiac dysfunction is used to determine the optimal management strategy for twins with TTTS. 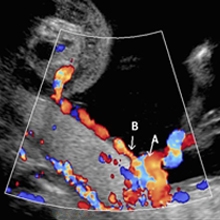 TRAP Artery-Artery Connection Twin reversed arterial perfusion (TRAP) sequence is a relatively rare condition occurring in about 1 percent of all MC pregnancies. In TRAP, a normal twin (or pump twin) develops abnormal, unidirectional arterio-arterial and veno-venous communication with its co-twin, such that this co-twin’s arterial vascular supply is only via retrograde flow from the artery of the pump twin without any placental supply. The para-biotic twin receives only the less-oxygenated and nutrient poor arterial blood from the pump twin, which eventually results in a spectrum of anomalies, including severely abnormal or absent cardiac development (referred to as an acardiac twin), as well as acrania, massive hydrops fetalis, and malformed and severely edematous extremities.

The demonstration of reversed arterial and venous flow in the umbilical cord and fetal circulation by color Doppler sonography of the para-biotic twin establishes the diagnosis. Often the anomalous artery-to-artery connection on the placental surface can be directly visualized by sonography.

The acardiac twin threatens the survival of the pump twin by acting as a systemic shunt with resultant congestive heart failure and polyhydramnios, increasing the risk for premature delivery. The size of the acardiac twin seems to be the best predictor of the outcome and can be calculated by measurements of all fetal body parts, allowing a volumetric assessment. Similar to TTTS, spectral Doppler analysis of the ductus venosus and middle cerebral artery, as well as fetal echocardiography, are crucial to assess the severity of cardiac dysfunction of the pump twin.