At their 20-week ultrasound, Antoinette and Anthony Spence were so excited to find out they were expecting a little girl that neither of them noticed the technician spent a lot of time looking at one particular area. 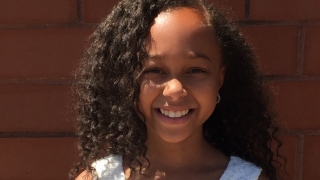 It wasn’t until the doctor came into the examination room to discuss the results that the New Jersey couple knew something was wrong.

The daughter Antoinette was carrying had a left congenital diaphragmatic hernia (CDH). This abnormality, which occurs as the fetus is forming, is an opening in the diaphragm (the muscle that separates the chest cavity from the abdominal cavity) that allows abdominal organs to move into the chest. It can be life threatening because the displaced organs take up the room the lungs need to fully develop, causing pulmonary hypoplasia.

“My heart dropped at that moment,” remembers Anthony. The news was especially devastating because the couple had suffered a miscarriage just a year earlier.

“The doctor told us that the condition was extremely serious, and referred us to Children’s Hospital of Philadelphia (CHOP),” says Antoinette.

That evening, Anthony and Antoinette did some Internet research about the condition, and the statistics they found were grim. The next morning they called CHOP and scheduled a consultation for the following week.

“Any CDH is serious, even critical,” says surgical advanced practice nurse Kelli Young, MS, CRNP. “But in Simone’s case, the liver remained in the abdominal cavity, making the condition a little less severe than most cases.”

In addition, the baby had no associated congenital heart disease or chromosomal problems.

The pregnancy was followed closely, and on Sept. 8, 2005, baby Simone entered the world a week earlier than expected.

Unfortunately, doctors discovered that Simone’s condition was worse than they had anticipated. She had to be put on ECMO (extracorporeal membrane oxygenation), a heart/lung bypass machine that provided temporary breathing and cardiac support while doctors prepared to treat her CDH.

On Sept. 17, while still on the ECMO machine, Simone underwent surgery to repair the diaphragmatic hole with a small patch. Two days later, she was removed from the heart/lung bypass machine and placed on a ventilator. A week later, she was breathing on her own and her parents started thinking about taking her home.

Reflux and another surgery

However, that was not the end of Simone’s obstacles. She had severe gastroesophageal reflux disease (GERD), which allows the movement of food, fluids and digestive juices from the stomach back up into the esophagus. The condition is common in patients with CDH.

To alleviate the GERD, Simone underwent another operation on Oct. 20 — a Nissen fundoplication. The surgery entails wrapping the upper part of the stomach around the esophagus and sewing it to help prevent food from refluxing up.

The surgery was a success and Simone was able to go home 10 days later.

The couple credits “a lot of praying and a lot of love” for their daughter’s survival.

“We did a lot of praying before and after she was born,” says Antoinette. Adds Anthony, “Affection also played a big part. We poured it on thick from the start, and I believe that helped her fight through the acute period.”

They also give lots of credit to Simone’s surgeon, Holly Hedrick, MD, her team, the ECMO technicians, and the Newborn/Infant Intensive Care Unit nurses who took such great care of Simone.

Most of all they give credit to Simone herself, whom they call “a fighter in every aspect of the word.” 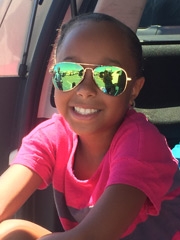 Over the years, Simone's health has improved by leaps and bounds with help from occupational therapists and a feeding clinic. She has stopped the majority of her medications, and continued therapy has helped improve her appetite. She's even become an adventurous eater and is always willing to try something new.

Now 11 years old, Simone's parents say she has grown into a social, loving and brilliant young lady, with a wide range of interests and talents. She is a fantastic student and an active member of Girls Who Code, a computer programming club for girls, as well as her middle school newspaper. In her free time, she enjoys drawing, jewelry making, crocheting, sewing, and Taekwondo.

Simone is also an accomplished pianist, and was recently was awarded First Class Honors from the Royal Conservatory of Music. Most recently, she added flute to her repertoire, playing for both her school band and the jazz band — an amazing accomplishment considering that she was born not being able to even breathe on her own!

"She never ceases to amaze us with her resiliency and strength of mind and heart," says Antoinette.