When Laura Srinivasan was three months pregnant, she and her husband, Reuben, decided on a name for their daughter: Grace. 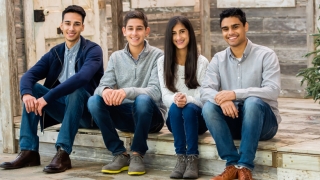 Grace with her brothers. “As it turns out,” says Laura, “that name would be appropriate.”

Grace was indeed a blessing, considering doctors originally didn’t expect her to survive.

After a routine ultrasound performed at 19 weeks at her Michigan doctor’s office, Laura was told her baby had a mediastinal chest mass — a solid growth developing between the baby’s heart and lung.

The doctor told Reuben and Laura the condition was fatal, and their options were to end the pregnancy or wait for the baby to die in utero, and then deliver her.

Laura and Reuben knew in their hearts there had to be another option, and sought a second opinion. Fortunately, the second doctor they spoke with suggested they travel to Children’s Hospital of Philadelphia (CHOP) to meet with Holly Hedrick, MD, and the fetal surgery team at CHOP's Center for Fetal Diagnosis and Treatment.

“We were totally distraught," says Laura. "She hadn’t been born yet; we didn’t even know her, yet we had all these high hopes for her. Everyone was saying it was fatal. We had to do everything we could, we had to exhaust all possibilities.”

Just days later, they boarded a plane for Philadelphia.

Fetal surgery to remove the mass

At Children's Hospital, Laura went through a full day of testing, which included gathering 3-dimensional images of the baby’s heart to get a detailed view of Grace's condition. After the evaluation, Dr. Hedrick and the team explained that fetal surgery to remove the mass was one option they could try — but that the outcome wasn't guaranteed.

“The odds weren’t good,” says Laura, “But we were all willing to try."

On June 14, at 23 weeks' gestation, doctors operated in utero to remove the mass. The surgery was a complete success — the mass was taken out, and Grace was left to continue growing in her mother’s womb. However, just days later, Laura went into labor. Grace was born on June 25 weighing in at approximately 1 pound 8 ounces.

“We knew premature delivery was a risk,” says Laura. “But we didn’t have a choice.”

Grace was in a Catch-22 situation. The surgery is what triggered the premature delivery; but without the surgery to remove the mass, Grace would have died in utero.

Making a turnaround in the N/IICU

Grace spent the first few months of her life in the Newborn/Infant Intensive Care Unit (N/IICU), struggling to survive.

“The doctors in the N/IICU said she was one of the sickest babies they had ever seen,” recalls Laura.

Then, one weekend, Grace turned the corner.

“She decided to live,” adds Laura.

By the end of August, even though she was still on a ventilator, Grace was stable enough to be discharged to a children’s hospital in her home state of Michigan.

On Oct. 12, Reuben and Laura brought their baby home for good. Although she was still hooked up to a ventilator and feeding tube, Grace continued to steadily improve.

From the N/IICU to middle school 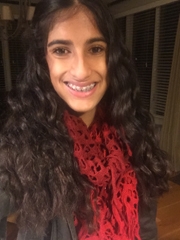 Today, Grace is your typical seventh grader, busy with school, extracurricular activities and spending time with her friends.

Grace plays flute in the school band and sings in the choir. She also enjoys photography, and puts her skills to use on the yearbook committee. Her favorite photo subjects are the family dog, clouds and sunsets.

All the concerns about the consequences of having a mediastinal chest mass and having been born premature are in the past, say her parents.

“We’re just so grateful to have found Children’s Hospital when we did,” says Laura, adding, “But I don’t think it was a coincidence. We were meant to find (the Hospital); Grace was meant to be here.”