Neurodevelopmental dysfunction in children with CHD 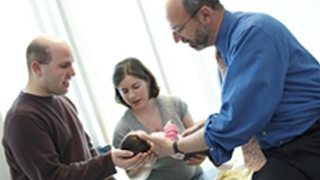 Dr. Licht also works with CHOP’s NeuroCardiac Care Program, a program created for children with CHD at risk for neurodevelopmental issues. Congenital heart defects (CHD) are among the most common birth defects in humans, affecting 8 per 1000 live births. One-third of these children will have severe heart defects that require surgical repair in early infancy for survival.

Improved survival over the last 15 years has revealed significant neurodevelopmental dysfunction among half of all survivors of these early surgeries. Underlying this neurobehavioral dysfunction is a high prevalence of white matter injury, termed periventricular leukomalacia (PVL). PVL occurs primarily in the immature brain when the oxygen demand of the brain tissue exceeds the delivery of oxygen and nutrients in the blood — delivery of oxygen can falter due to a lack of blood oxygen content or a drop in blood flow.

Research to study brain injury in Infants with CHD

Magnetic resonance imaging (MRI) has been used in previous studies to determine the prevalence of PVL in infants with CHD before and after surgical repair. These studies tell us that PVL injury occurs in 20 percent before surgery and just over 50 percent afterwards. For infants with single-ventricle CHD (such as hypoplastic left heart syndrome), the incidence may be as high as 80 percent after surgery. While MRI has been useful for identifying and quantifying PVL at specific time points, it does not provide information about the timing or underlying causes of injury — information that is vital to the development of targeted interventions.

In this NIH-funded study, MRI-based PVL identification and quantification is combined with continuous monitoring of cerebral blood flow and blood oxygen content, to provide a more complete picture of how and when injury occurs in this population. Participants in this study will undergo both a pre- and post-operative MRI scan as well as continuous post-operative monitoring of cerebral blood flow and brain oxygen saturations. A portable, noninvasive instrument developed at the University of Pennsylvania, which makes measurements by passing light through intact skin, will be used for continuous monitoring at bedside. Advanced methods for data analysis will be employed to study the relationships between vital signs and brain blood flow and oxygen saturations.

It is hoped that this new information will open up opportunities for physicians to build strategies to treat or prevent brain injury in infants with CHD. Furthermore, improved understanding of how noninvasive optical instruments can help improve the care of critically ill infants will greatly expand the use of this relatively new technology. The knowledge gained from this study will help design studies for other ‘at-risk’ populations of infants, such as premature infants, infants who have experienced birth trauma and other populations of critically ill children.