Published on Oct 16, 2014 in Cardiac Connection

Forty years ago, most children with complex congenital heart disease (CHD) died before reaching adulthood. Now, the vast majority of them survive. But half of all children who have heart surgery as infants experience significant neurodevelopmental problems — including behavioral issues and learning difficulties — later on.

CHOP neurologist Daniel Licht, MD, who cares for children with CHD as part of the Hospital’s Cardiac Kids Developmental Follow-up Program, is leading research to determine why these problems are so prevalent in children with CHD and how they can be prevented.

MRI scans performed in infants who have undergone early heart surgery for CHD show that more than 50 percent have an injury to the white matter of their brains. But it was another finding — that 20 percent of these babies show evidence of white matter injury prior to surgery — that was the “a-ha” moment for Licht. It was clear that for some babies, the risk of neurologic injury was highest not during or after surgery, as many believed, but before it. Licht’s early research focused on identifying 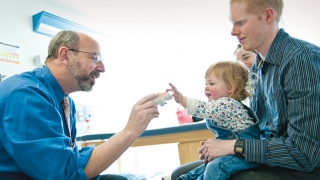 risk for brain injury before surgery and led to an understanding that the heart defect had a profound effect on brain development and growth.

“It’s the condition in which they go into surgery that makes the difference,” says Licht. “You can’t do surgery fast enough for these kids.” Licht’s work could lead to changes in surgical practice — and has also led to a new question: “If the most important thing is the health of the brain before surgery, what does that say about fetal life?” asks Licht, who is working with cardiothoracic surgeon J. William Gaynor, MD, and Jack Rychik, MD, director of the Fetal Heart Program, to identify drugs that can be given to a woman expecting a baby with CHD to protect the brain of her developing fetus.

“That really is the next frontier for this research,” he says. “Instead of focusing on protecting the brain during and after surgery, we want to find ways to protect the fetus’ brain before birth.”