Published on Oct 16, 2017 in Cardiac Connection

What are the best ways to decrease the amount of medical radiation patients receive without compromising the quality of their care? It’s a question healthcare providers around the world are asking — and physicians from the Cardiac Center at Children’s Hospital of Philadelphia (CHOP) are providing some innovative answers.

CHOP has long been a leader in an international initiative called Image Gently, which focuses on finding ways to reduce the amount of radiation children are exposed to during medical tests and procedures — an effort that, at CHOP, extends to the Cardiac Catheterization Laboratory. 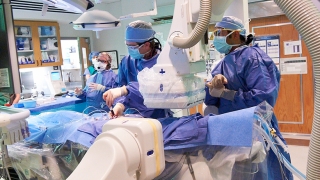 “Even though catheterization isn’t performed as frequently as many other tests, it’s a very large individual contribution to a patient’s overall dose,” says Andrew Glatz, MD MSCE, an interventional cardiologist at CHOP. “There’s been a lot of focus on making the dose in the cath lab as low as possible."

That work began in earnest in April 2009, when a multidisciplinary committee, led by Glatz; Virginia Jones, RN, who was Nurse Manager of the Cardiac Catheterization Lab at the time; Xiaowei Zhu, MS, DABR, DABMP, a medical physicist in the Department of Radiology; and Jonathan Rome, MD, Director of the Cardiac Catheterization Lab, began meeting to discuss ways to reduce the amount of radiation patients are exposed to during a catheterization. In October 2009, the interventional cardiology team began implementing the committee’s recommendations, which included:

Shortly after the team began implementing the recommendations, the number of cases each month that exceed 2 Gy (Gray) declined dramatically.

The team has sustained this success over many years, and continues to track each patient’s cardiac catheterization radiation dose very carefully. For example, in addition to looking at the amount of radiation a patient receives during an individual procedure, the team also monitors the patient’s cumulative radiation dose using a sophisticated technology that includes data from every radiological procedure the patient has had at CHOP. The software creates a “radiation passport” for each patient that the team can review when planning procedures. “If the patient has had a lot of exposures in the past, and we know that going in, we might modify the way the case is performed," says Glatz.

Investing in the ‘latest and greatest’ equipment

In the last few years, the team has also upgraded the X-ray equipment in two of CHOP’s cardiac catheterization suites, an investment that has led to a significant drop in patients’ radiation exposure without a change in the interventionalist’s performance or in image quality. (The third suite is planned for upgrade in the next academic year.) The reduction is particularly evident in the hybrid suite (catheterization lab/operating room), where cardiac catheterization radiation doses have dropped by nearly half. This work has informed the team’s approach to case planning: Every effort is made to ensure that long, complex procedures that might involve higher amounts of radiation, such as lymphatic interventions and transcatheter pulmonary valve replacements, are performed in one of the upgraded rooms.

Using MRI data to facilitate catheterizations also appears to be an effective way to minimize the amount of radiation patients receive during the procedure. Glatz and his collaborators have published research showing that when information from a cardiac MRI (anatomic and/or physiologic information) was used in combination with a fluoroscopy image — a process called “XMR” or X-ray Magnetic Resonance Fusion (XMRF), when the MRI image is overlaid on the fluoroscopy screen to aid catheter movements during the catheterization procedure — during diagnostic cardiac catheterizations, patients received a significantly lower dose of both radiation and contrast than similar patients who did not have an XMR.

Glatz is also involved in nationwide efforts to establish radiation dose benchmarks and best practices for pediatric cardiac catheterization labs — an ongoing project that is informed by the work he’s leading at CHOP. “Radiation dose is not static,” he says. “We will continue to revise the benchmarks as our equipment and techniques improve.”

To refer a patient to the Cardiac Center or discuss a case, please call our Nurse Navigators at 267-426-9600 or contact us online.